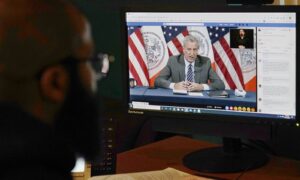 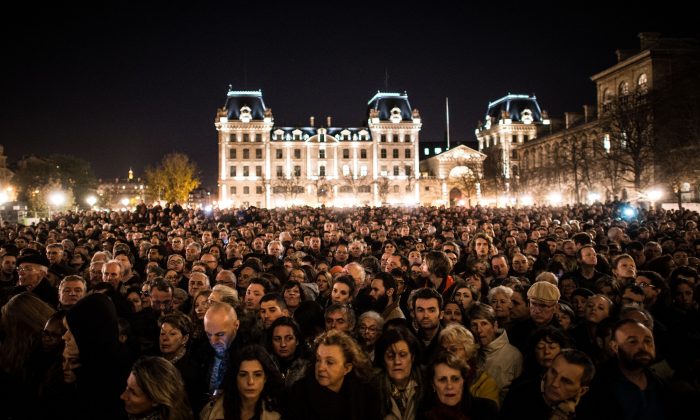 People gather outside of Notre Dame Cathedral in Paris, France, on Nov. 15, 2015, ahead of a ceremony to the victims of the Nov. 13 terrorist attacks. 129 people were killed and hundreds more injured in Paris following a series of terrorist acts in the French capital. (David Ramos/Getty Images)
New York

New York Venture Capitalist Seeks to Save the West

“In a sense you could say I behave like something of a groupie when I went about trying to arrange one-on-one sit-downs with each of those 13 very visible and very busy people,” Kenneth Abramowitz, managing general partner and co-founder of NGN Capital, one of the largest health care venture capital funds in America, told me in a recent interview in his mid-town Manhattan office.

With an impressive resume which, in addition to his position at NGN Capital, includes publishing dozens of major studies on key health care-related issues and earning in 2009 the designation by the prestigious “The Institutional Investor Magazine Poll’ as one of the top 15 American health care analysts in an industry composed of more than 20,000 professionals, Abramowitz, 65 and the married father of two adult children and three grandchildren, would probably seem to you to be on the top of the list of the world’s most unlikely groupies.

That is, until you learned “those highly visible and very busy people” to whom he was referring were Donald Trump, Marco Rubio, Ted Cruz, John Kasich, Ben Carson, Jeb Bush, Carly Fiorina, Chris Christie, Rand Paul, Lindsey Graham, Rick Santorum, Mike Huckabee, and Scott Walker: All candidates for the Republican Nomination for presidency during the past year and a half that Abramowitz had been working on his plan for that “sit down.” (The last eight named have since left the race.)

That plan, which was to work with every Republican presidential candidate except Trump, followed the same formula with each. Abramowitz would search the Internet to learn when the particular candidate had scheduled a campaign event anywhere within the tri-state area. Those events typically took place in the home of a prominent supporter.

Then during the event, Abramowitz, a Republican who focuses solely on members of his party, would, he explained, “go directly over to the candidate who was usually walking around the room engaging in conversation with people. I would introduce myself and then exchange business cards. From that point, the process simply evolved into a steady series of phone calls with the candidate’s staff until a face-to-face meeting could be arranged.”

Actually, Abramowitz handed the candidate not one, but rather, two business cards. Abramowitz told me, though, it was probably the first card that simply reads “Kenneth Abramowitz, Managing General Partner NGN Capital” which first captured the candidate’s attention.

“My name and my company are well known throughout the health care industry and to some degree within the political world, which, I admit, is what first opens the door for me,” Abramowitz stated. “But it is not health care that I wanted to discuss with the person who could become the next leader of the free world.”

What Abramowitz did want to discuss with the possible next president of the United States was contained in the second card he presented, which simply reads “Ken Abramowitz Save The West.”

Founded by Abramowitz two years ago, “Save the West” is a fast growing conservative think tank whose mission, he explained, is mirrored in its name. “Just as our name implies, we have to save western civilization, which includes America, Europe, and Israel from the existential threat posed by Iran, North Korea, and global Islamic Jihadism… all pursuing our total destruction as a people and as a civilization,” he stated.

“Even as we speak Iran is developing nuclear weapons, despite President Obama’s so called Iran Nuclear Deal, and North Korea is expanding its already frightening nuclear arsenal. Both these rogue nations, by the way, possess ICBM’s soon capable of reaching major northeastern and northwestern American cities.

“And of course,” added Abramowitz, who has created the organization’s own website (SaveTheWest.com) and has spoken to hundreds of mainly conservative-oriented audiences throughout the world about the threat posed by Islamic terrorism, “there is the Islamic State (ISIS) which is committing mass genocide against Christians, who are the number one persecuted minority in the world today. Yet the mass murders of Christian men, women, and children at the hands of Islamic Fascists is kept almost a secret by our media.”

Abramowitz told me that when he would meet with the candidates, usually at a restaurant within proximity of the candidate’s then scheduled campaign event, at the site of the campaign event itself, or in his own office at NGN Capital, he would express the same concerns to them that he had just described to me. “We discussed the grave threat faced by Western Civilization today… And while we had an agreement that the comments they made and the questions they asked would be kept confidential, I am able to tell to you that every one of the candidates greatly impressed me with their understanding of the barbaric nature of the enemies we face and each appeared committed to developing strategies to defeat them.”

For economic growth to occur, the government must lift the shackles of literally thousands of gratuitous federal regulations off the backs of both small and large businesses.
— Kenneth Abramowitz, managing general partner and co-founder, NGN Capital

Abramowitz also told me he also discussed with each candidate what he described to me as the three main principles of Save The West: “First, we believe in economic growth, which comes only from free market capitalism. For this growth to occur, the government must lift the shackles of literally thousands of gratuitous federal regulations off the backs of both small and large businesses.

“Secondly, we believe in military strength. We still have the greatest military in the world, but the current administration has implemented severe cuts in military spending, which has jeopardized the safety of our country during very dangerous times at home and abroad.

“Lastly, we believe in maintaining and strengthening our cultural values. These values are embedded within the Judeo-Christian tradition upon which America was built. Yet those very values are under severe attack today.”

He then quickly added that every candidate agreed with those tenets. “It was like a minister preaching to the choir,” he told me. “How could a conservative disagree with the core beliefs of conservatism?”

Related Coverage
The Missing Half of Congress’s Job

Though asked several times, Abramowitz refused to name the candidate who impressed him most during those “sit-downs.” “I wanted to use my meetings with them as an opportunity to share my insights on how to save western civilization,” he explained, “not as a de facto interview. And there is another reason for my reticence: unless the candidate I selected turns out to be the winner, announcing my favorite might alienate the person who might wind up becoming the next president of the United States. And in fact, that is the same reason I will not endorse any of the remaining current candidates [Trump, Cruz, Rubio, Kasich, Carson] during the Republican primaries.”

“But let me tell you,” added the admittedly purely partisan Abramowitz, “I would endorse and support any one of them over Hillary Clinton, Bernie Sanders, or any other candidate the Democrats might still put up.”

As for the only Republican candidate with whom he has been unable to arrange a formal meeting to date, Abramowitz explained, “We have been playing phone tag with Mr. Trump’s campaign staff… I realize he may well be the next president of the United States, so I won’t give up.”