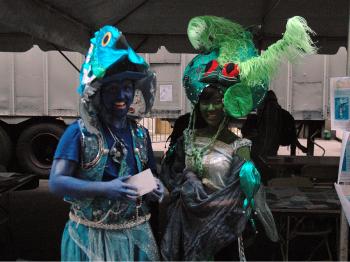 A line of people holding umbrellas in the afternoon rain stood alongside a large tent that was erected in the middle of Washington Place between Greene Street and Washington Square East. They were waiting on the free vegan Indian food that was offered in celebration of Earth Day.

The event was organized by Sarah Henderson, who is the Earth Week Planning Committee Chair and majors in environmental affairs at NYU.

Underneath the tent were vendors selling eco-friendly and recycled goods and some were there to let people know of environmental issues. A three-piece band played bluegrass tunes with Washington Square Park as their backdrop.

The New York University (NYU) Sustainability Task Force was present and spreading awareness about what they do. “We develop recommendations for NYU’s faculty to get a cleaner campus and improve NYU’s environmental performance,” said Jeremy Friedman, the Sustainability Task Force’s project administrator. Friedman not only wants to work for a greener campus but he “wants to green our minds as well.”

Friedman spoke of an on-campus effort called “NYU Unplugged.” It’s a dorm-based energy saving competition where the dorms compete against each other to use the least amount of electricity,” said Friedman, “the winner receives a trophy that’s a gold-painted lamp and “Party in the dark.”

Another NYU program was called “Green Grants,” which is a rewards system for eco-friendly solutions and has birthed ideas like virtual document exchanges between offices and a community agriculture club.

One table was simply asking people to turn off their engines while sitting in their parked cars in the city. They were trying to get the ice cream trucks that sit outside the elementary schools to sit a little further back where the diesel fumes from their refrigeration units would not be so close to the kids.

“This was the first year in a while where some Americans said: yeah, it [the environment] is getting better,” said Friedman. “This is a source of concern because we haven’t got the ball rolling in the other direction yet, we have slowed the pollution but there is so much left to do.”

Anna Smukowski works with the Sustainability Task Force but she was hosting a “Hunger Banquet” late this week which, she said, is a “Simulation of how some people have to live on nothing.” “Each guest gets a card that defines which social stratus they will be from and this is their character for the night,” said Smukowski, who also wants to start an initiative to show school faculty and staff how they can make money by properly investing in green resources.