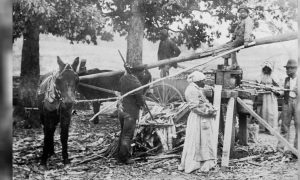 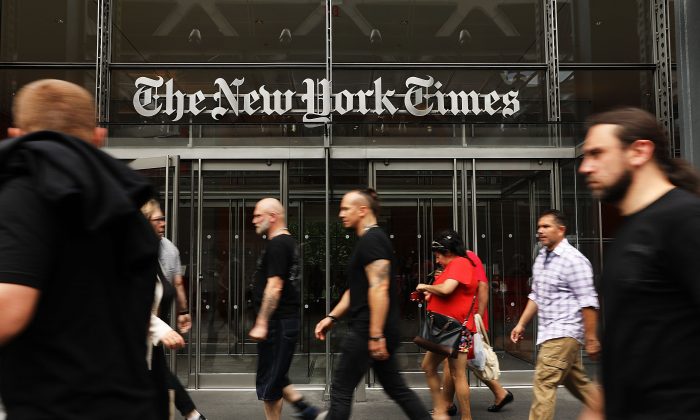 '[The New York Times] can never recover, and will never return to Greatness, under current Management,' Trump said.
By Mimi Nguyen Ly

President Donald Trump expressed late Sept. 16 that he felt “everybody” at The New York Times involved in producing a recent article about Supreme Court Justice Brett Kavanaugh should resign after the paper issued a major correction to the article.

“They’ve taken the Old Grey Lady and broken her down, destroyed her virtue and ruined her reputation,” Trump continued. “She can never recover, and will never return to Greatness, under current Management. The Times is DEAD, long live The New York Times!”

The New York Times on Sept. 16 issued a major correction about a report released Sept. 15 about a sexual assault claim against Kavanaugh, which it presented to be a “previously unreported story.”

That story published an excerpt from a soon-to-be-published book by two of its reporters, Robin Pogrebin and Kate Kelly. The excerpt, taken out of context, alleged that a classmate of Kavanaugh, Clinton-connected nonprofit CEO Max Stier, “saw Mr. Kavanaugh with his pants down at a different drunken dorm party” in a lewd situation that was said to have affected a female student.

In the correction, the paper admitted that it had omitted two details that would undermine the decades-old allegation against Kavanaugh. The first detail was that friends of that female student said she does not recall the event. The second detail was that the woman herself declined to be interviewed.

The New York Times correction stated: “An earlier version of this article, which was adapted from a forthcoming book, did not include one element of the book’s account regarding an assertion by a Yale classmate… [lewd details omitted].”

“The book reports that the female student declined to be interviewed and friends say that she does not recall the incident. That information has been added to the article,” it added.

The fresh allegations are similar to those made by a then-student Deborah Ramirez—who accused Kavanaugh of exposing himself at a party in his freshman year in the 1980s—an allegation that Kavanaugh denied under oath during his confirmation hearing.

‘They Don’t Do Fact-Checking Anymore’

Speaking to reporters in the afternoon after the paper issued its correction, Trump called it “another terrible mistake” for The New York Times.

“It’s a shame that a thing like that could happen. I see they’re making a big correction today. They’ve just announced there’s a correction,” he said.

“But to do that about a Supreme Court justice is a terrible thing. It’s a false accusation.

“Whatever happened with the New York Times—I mean, I can tell you personally that they never check. They never do—we used to have a thing called ‘fact-checking.’

Read More
Trump Responds to NY Times Correction: ‘The One Who Is Actually Being Assaulted Is Justice Kavanaugh’

“They don’t do fact-checking anymore. They used to call and say, ‘What about this? What about that?’

“How can they do a thing like that and destroy somebody’s life? I mean, they’re destroying lives. And it’s fake news. It’s just fake news.”