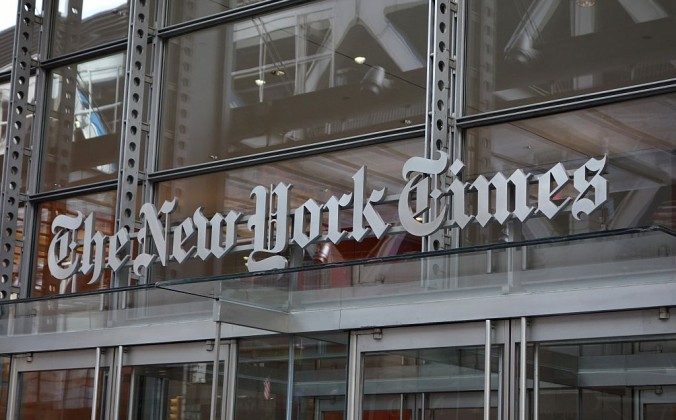 The sign over the west entrance of the New York Times building at 620 Eighth Ave. in New York on April 28, 2016. The Times has been criticized for publishing a fictional story that depicts a Russian trying to kill president Donald Trump; the story was published online on Oct. 23, 2018. (Don Emmert/AFP/Getty Images)
US News

The New York Times has been criticized for publishing a short fictional story that depicts a Russian assassin’s attempt to take out President Donald Trump, with a plot twist where a U.S. Secret Service agent lends him help.

The U.S. Secret Service released a statement calling the story an insult to the agency.

“While we understand this is a work of fiction, the insinuation that the U.S. Secret Service would participate in the assassination of a president is outrageous and an insult to the men and women of this agency,” a Secret Service spokesperson told Fox News.

“The U.S. Secret Service prides itself on being an apolitical agency with a long and distinguished history of protecting our nation’s elected officials.”

The story, titled “How it Ends” by author Zoe Sharp, was first published online on Oct. 23 in the Times’ Book Review section in a series called “Five Novelists Imagine Trump’s Next Chapter.”

An excerpt from the 600-word fictional story reads:

The Russian waited until they were a few steps past before he drew the gun. He sighted on the center of the president’s back, and squeezed the trigger.

The Secret Service agent at the president’s shoulder heard the click, spun into a crouch. He registered the scene instantly, drawing his own weapon with razor-edge reflexes.

The Russian tasted failure. He closed his eyes and waited to pay the cost.

It did not come.

He opened his eyes. The Secret Service agent stood before him, presenting his Glock, butt first.

A Times spokesperson told Fox News: “It’s very clear what this is: A work of fiction, commissioned by editors of the Book Review as part of a package of five stories penned by a range of spy and crime novelists—in the Halloween edition.”

“The clincher is maximally offensive, with traitorous behavior by a Secret Service agent added to the assassination of an actual living president.” Waters wrote on NewsBusters.org.

Sharp’s story was published in the same week that pipe bombs were found addressed to prominent political figures across the country, including Hillary Clinton and Barack Obama.

Bre Payton, writer at The Federalist, noted that in the same week, the Times had published an opinion piece in which president Trump is blamed for creating a “toxic environment” that may have prompted the attacks. The Times’ opinion piece said that Trump, via “his overheated, overwrought rhetoric,” had openly targeted the same people who had been sent the pipe bombs.

Payton writes: “Should The New York Times, which published Trump-killing fan fiction, be held to the same standard [that] it expects of the president?”

“Or do they get to paint a rhetorical backdrop of bloodshed and get to be viewed as blameless for the fractured and hostile environment we all find ourselves in?”

Readers commented on Sharp’s Twitter post in which she wrote that she is “honoured” to have been featured in the Times’ publication.

“To write a story about assassinating a sitting or former president that is living is totally unacceptable,” Jim Goddard wrote on Twitter. “The hatred in this country is on a course that is going to bring much trouble against both sides of our political parties.”

“Stop the hatred rhetoric,” he added.

“Very disappointing. Just because we are protected by First Amendment rights, does not mean that people should be able to disrespect our POTUS in this way. What a disgusting nation we are becoming. Media is out of control,” Twitter user Nancy D’Alessandro wrote.

“Disgraceful. You should be ashamed as should the NY Times. Decent people on both sides of the aisle see this as the disgrace that it is,” Twitter user Mark M Miller wrote.

“Try being part of the solution in the future not a disgraceful part of the problem,” he added.