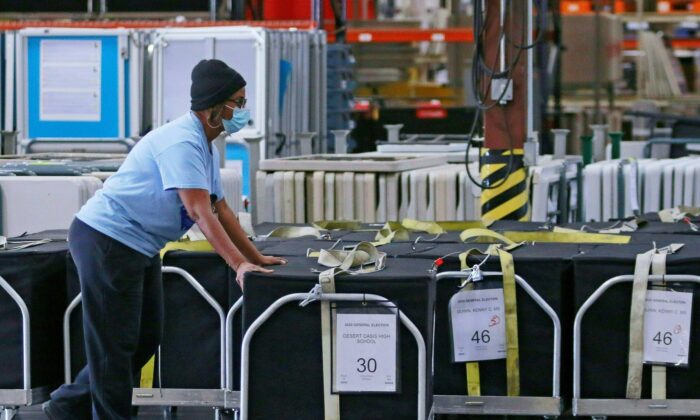 A worker moves voting machines that were used the previous day at the polls into a warehouse at Clark County Election Department in North Las Vegas, Nev., on Nov. 4, 2020. (Ronda Churchill/AFP via Getty Images)
Viewpoints

An idiom from the World War II era is a number of variations of, “You know you’re over the target when you’re receiving fire (flak).” I’m not sure how the profession of Fact Checkers developed or what the certification process is to become validated as an official Fact Checker, but it appears that above Snopes or others, the highest self-appointed council of Fact Checkers is the New York Times. The Epoch Times has personally experienced this scrutiny recently and received a fair amount of flak.

A new effort has rapidly stood up called Everylegalvote.com (for full transparency, I am part of the Everylegalvote.com assemblage that has self-formed) has received the same treatment from the high priest wardroom of the New York Times.

Our new effort dares to collect facts in a non-partisan manner and stand against the lockstep narrative enforced by media who have declared former Vice President Biden a winner when the other candidate hasn’t conceded. In addition, several states are in tumultuous chaos and their electoral outcomes are severely contested.

With one word, “debunked,” Mr. Bilefsky of the New York Times discards thousands of citizen reports brought to light by Everylegalvote.com. Mr. Bilefsky’s response is utterly totalitarian. He is disinterested in any form of objectivity or shows no curiosity about the facts. The word “debunked” is now instinctively barked by the wardens of truth (self-appointed) before the evidence is even read or analyzed.

American voting has never been perfect. The questions about Kennedy’s win in 1960 being assured by unscrupulous events in Chicago are part of American political history lore. But what we’re facing now is far different. The pervasive use of the electronic voting machines on a broad scale has changed everything.

A key part of the Everylegalvote.com initiative, led by Kevin Freeman and the Economic War Room, is the unleashing of the data analysts to analyze the electronic voting machines situation. The members of the Everylegalvote.com alliance have focused on understanding the operating schema of Dominion. Simply put, the Dominion schema makes no sense from the very first step.

Instead of putting votes for each candidate in a distinct, separate, candidate bin, the Dominion concept is to put all votes for an office in a singular bin and then use math and data analytics to sort the numbers back out.  What possible reason is there to put all the votes in a singular bin and then apply math or fractional or proportional voting to assign the tallies?

The Dominion schema was a key part of the simultaneous, multi-state stop and then re-start of the voting process in the early hours of Nov. 4 which then assigned votes in unreasonable statistical manners that in some cases showed exact, continuous proportion of vote tally tranches, across numerous precincts, which is a red flag for voting fraud.

There are a number of other data analysts that have shown the absurdity of the various means of voting irregularities including the unrealistic vote tally tranches. Reminiscent of the 2004 Memoscam, apolitical data analysts curious about truth, not partisan outcome, have descended en masse on this topic. They need to be heard.

The Dominion operating concept is in some ways like using software to force the center of gravity on the 737 Max airliner. What can possibly go wrong here? Everything. Russ Ramsland and Keet Lewis pioneered the exposure of the massive vulnerabilities of Electronic Management Systems. The Dominion concept hides and obscures the tabulation process in a willfully over-complicated manner that seems to intentionally go against a key tenet of honest elections: transparency.

Foundations of a Free and Fair Election

Transparency is a key theme throughout the Carter Center’s guidelines and a basic tenet of fair and free elections. The Dominion operating concept allows too many methods to manipulate the voting tally in a non-transparent manner. Essentially an election official, pre-loaded algorithm, updated algorithm, internet-based injection, and likely more methods add further cloaking and obscurity to the process.

Another group that has done heroic work in the analysis of fraud on scale in the 2020 election is the Amistad Project led by Phil Kline. Alongside the compilation of voting fraud reports of Everylegalvote.com, the Amistad Project is forcefully pursuing litigation in the swing states to ensure that all lawful votes are protected. Every unlawful vote nullifies a lawful vote. This goes against the foundation of our Constitution, equal protection for all lawful citizens.

We’re roughly 20 or so days into this process. Al Gore had 35 days in 2000 to rightfully challenge hanging chads in one state. Our system will only work if all parties, politicians, and private citizens are allowed to analyze and publicly question election officials and their determinations outside of the shadow and tyranny of the self-declared fact checkers.

Mr. Bilefsky may have his view of current events, we have ours, and we back it with data. Crushing dissent with the “de-bunked” megaphone goes against the basic American concept of freedom of speech.

Some have noted there are still very viable pathways to a Trump victory at this point; they are not unreasonable scenarios. Ensuring the continuation of our incredible experiment in history is certainly worth a few more days to rightfully follow a constitutional process of peaceful discourse. The gatekeepers of truth need to step aside and let the citizens, who own the American Constitution, work this out.