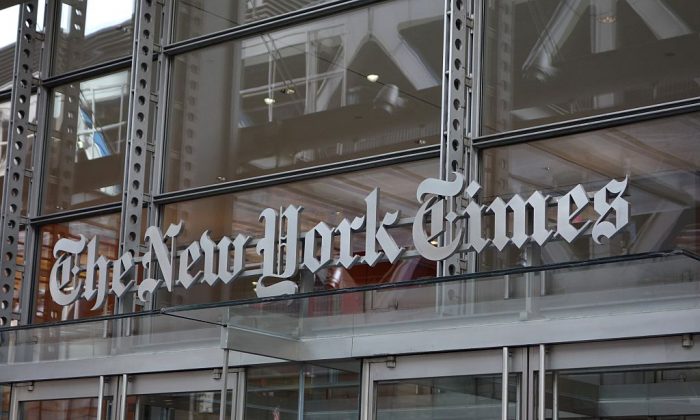 The sign over the west entrance of the New York Times building at 620 Eighth Ave. in New York on April 28, 2016. (DON EMMERT/AFP/Getty Images)
The Dead End of Communism

It has been nearly 100 years since the February Revolution in Russia, which was used by Vladimir Lenin’s Bolsheviks to launch a coup in 1917, beginning a century of communist rule around the world marked by social decay, famine, and genocide.

The New York Times is commemorating this coming anniversary with a new series of articles on communism, the first of which on Feb. 24 omits any mention of the crimes against humanity committed under communist rule. Instead, it writes glowingly about the ideals of communism and asks whether we will see the “phoenix rise from the ash heap of history.”

Most of the world agrees Adolf Hitler was a monster whose totalitarian regime systematically murdered 6 million Jews, among other victims. All told, 11 million people died in the Holocaust.

Yet, in a similar light, why do so many academics who oppose fascism seem to support communism, which has killed in various estimates between 100 million and 150 million people? That’s many times more than died under Hitler.

In Cambodia alone, Pol Pot and his Khmer Rouge murdered a quarter of their own population in what are now remembered as the “killing fields.” Just like the Nazis, in a sadistic fashion similar to a serial killer, the Khmer Rouge photographed many of its victims—young men and women, the elderly, and even young children—before they shot them, suffocated them with plastic bags, or pummeled them to death with clubs.

We can also largely agree that protecting indigenous cultures and traditional beliefs is a noble cause.

Under communist rule, these same cultures and beliefs have repeatedly been marked for eradication. With its own ideology of atheism and Marxist dialectics, the ongoing stance of communist regimes is that their own views are the end of human progress and that all other ideas should be squashed with violence.

Josef Stalin had nearly every Muslim Tatar in Crimea rounded up and sent to camps, where they were slaughtered in the tens of thousands. The Chinese Communist Party still persecutes Tibetan Buddhists, Muslim Uyghurs, House Christians, and Falun Gong practitioners on a large scale.

The communist regimes still in power in China and in North Korea also continue to use Stalin-esque gulags and their vast networks of labor camps.

The New York Times piece seems especially fixed on the days of Lenin. It notes, in a romantic example, one of Lenin’s loyal followers, Semyon Kanatchikov, who “left rural poverty for a factory job and the thrill of modernity.”

Kanatchikov is a good example in this case. He, like most who were duped by communism, appeared to truly believe that it would give humankind a way out—that it would create the paradise on Earth that all communist leaders from Lenin to Kim Jong Un have promised.

Kanatchikov was ultimately purged by Stalin and died in a gulag in 1940.

Lenin had an unkind phrase for people like Kanatchikov. He referred to the idealists who would help communist leaders take power as “useful idiots,” as these people were often later jailed or murdered.

History witnessed many cases like this. Mao Zedong praised his supporters among Chinese students, from whom he created his “Red Guards.” During the Cultural Revolution of the 1960s and 1970s, Mao used the Red Guard as his personal gang of thugs to attack, humiliate, or kill the “rightists” and landlords, or anyone who had not studied his own teachings deeply enough.

When Mao no longer had use for the Red Guards, he shipped them off to the fields as peasants.

While the Marxist history revisionists still try to argue that communism just hasn’t ever been done right—writing off 100 years of failed examples—I would question how many times humankind needs to fall into the same pit before it learns to take another road.

In every instance, in every country it has been tried, communism has brought waves of murder and misery.

For the people who lived under communism—including those who escaped East Berlin, those who fled the Soviet Union, those who survived the Khmer Rouge Killing Fields, and the countless others still being persecuted by communist regimes today in countries including China and North Korea—the New York Times piece feels scarcely different from a Nazi apology, an apology for cultural elimination, torture, and genocide.