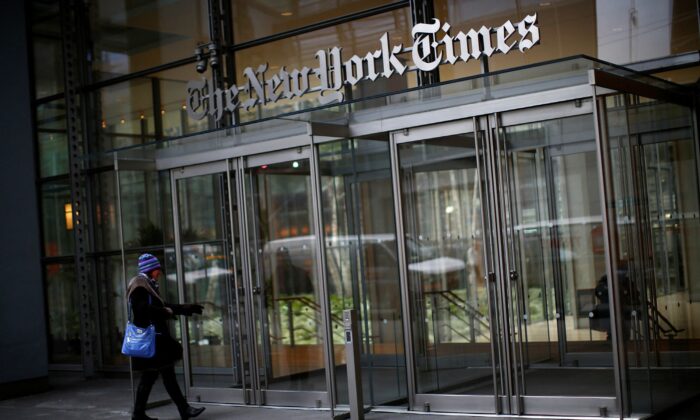 On the eve of Passover, on Good Friday, The New York Times published an opinion piece on God, the Bible, and Passover. This would not be noteworthy except for the fact that the piece mocked all three.

The two titles of the piece (one in the print edition and one for the Times’ digital edition) will give you a good idea of the tenor of the piece: “Let’s pass over God” and “In this time of war, I propose we give up God.”

The column was written by Shalom Auslander, a Jew who is bitter over his ultra-Orthodox upbringing in Brooklyn. He is also the author of a similarly bitter book titled “Foreskin’s Lament.”

Here are some of the column’s highlights:

Auslander begins his column with a brief explanation of the name “Passover”—God passed over the homes of the Israelites on His way through Egypt, slaying all firstborns. The author follows that introduction with a proposal: “In this time of war and violence, of oppression and suffering, I propose we pass over something else: God.”

He then proceeds to depict the rabbi at his yeshiva as a sadist who reveled in the suffering of the Egyptians, “young and old, innocent and guilty.” This rabbi, he claimed, even told his yeshiva class that during the first plague—which caused the waters of Egypt to turn into blood—“Mothers nursing their babies … found their breast milk had turned to blood.”

They were learning to be sadists like their rabbi.

As it happens, having studied in a yeshiva until the age of 19, having written three volumes of a five-volume commentary on the Torah (“The Rational Bible”) and most recently having written the bestselling Haggadah in America (according to Amazon), “The Rational Passover Haggadah,” I know a fair amount about this subject.

I never heard a Jew say that Egyptian mothers’ milk turned into blood. I’m not accusing Auslander of lying, but if what he wrote is true, it is highly irresponsible to represent something so bizarre as normative Jewish teaching.

As for his classmates cheering, “Yay!” this is the very opposite of how Jews have been taught to relate to the sufferings of the ancient Egyptians.

First, according to the Talmud—the holiest Jewish work after the Hebrew Bible, written nearly 2,000 years ago—with regard to the Egyptians drowning in the sea after God split it to enable the Jews to cross it, God admonished his angels who sang a song of rejoicing: “My handiwork is drowning in the sea and you are singing before me?!”

Every Jew who attends yeshiva is taught that. Every.

Second, also nearly 2,000 years ago, the Midrash (a collection of stories and commentary that interpret the Hebrew scriptures) explained why Jews are to recite only half of the Hallel (psalms of thanksgiving) during the days of Passover following the Seder: “We cannot sing a full song of thanksgiving for the salvation of our people, which was purchased so dearly with the sinking of the pursuers into the Red Sea.”

Third, for at least 100 years, and some say many more, the reason Jews have given for the symbolic spilling of wine from their cups while reciting the ten plagues during the Seder is that we are to symbolically diminish our joy when retelling the Egyptians’ suffering.

“If he were mortal, the God of Jews, Christians, and Muslims would be dragged to The Hague. And yet we praise him. We emulate him. We implore our children to be like him…Perhaps now is a good time to teach our children to pass over God—to be as unlike him as possible.”

Auslander looks forward to the day when children will be taught to be as unlike God as possible. Then, when they hear biblical stories about God, “‘Boo!’ the children will jeer.”

To begin with the last quote, that children will boo God, is the hope not only of Shalom Auslander, but also of The New York Times. People need to understand the loathing of traditional Western religions and of Bible-based (i.e., “Judeo-Christian”) values that has permeated leftism since Marx and, later, Lenin. Many liberals affirm religion, but the Left hates it. The Left understands that the only viable opposition to it consists of Orthodox Jews, traditional Catholics, evangelical Protestants, and traditional Mormons.

It is close to inconceivable that The New York Times would publish a column mocking Allah, Muhammad, and the Quran during the month of Ramadan (or, for that matter, at any time of the year). It is now Ramadan, and the only articles I could find in The New York Times about the Muslim holy month are about food: “15 Recipes for Observing Ramadan,” and “Where Breaking the Ramadan Fast Includes Caribou,” an article about Muslims in Anchorage.

Why is there no New York Times piece mocking Allah or Islam? There are, after all, plenty of disaffected Muslims like Auslander, the disaffected Jew, who could write one. The answer is The New York Times is deathly afraid of incurring Muslims’ wrath, but it has no fear of incurring the wrath of Jews or Christians. For good reason.

The Auslander column tells you nothing about Judaism or the Bible. But it tells you a great deal about The New York Times and the Left.