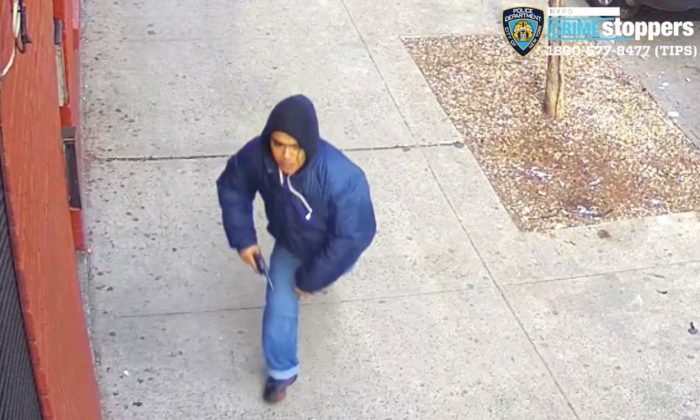 A gunman identified by the NYPD as 16-year-old Edgar Garcia opens fire on a crowded street in the Bronx borough of N.Y., on Feb. 22, 2019. (New York City Police Department via AP)
Crime and Incidents

WARNING: VIDEO MAY BE DISTURBING!

A video circulated by the New York Police Department showed bystanders, including a little girl running as the gunman fired several shots. No one was hit by the gunfire.

In the video, the little girl can be seen holding a backpack and walking down the sidewalk before the man approaches and fires in her direction as she takes off running. Police say Garcia was aiming at another man who was down the block.

The footage was recorded on Gerard Avenue in the Bronx borough of the city on Feb. 22 around 2 p.m.

Police say 16-year-old Edgar Garcia was arrested on Friday, March 1, and is suspected of being the gunman in the video.

Garcia faces charges including attempted murder, criminal use of a firearm, and reckless endangerment. It’s not clear if he has an attorney who can speak for him.

Here’s a closer look at the suspect. pic.twitter.com/cgnQPAwhvX

A news crew covering a teacher’s strike in California over the weekend was robbed by two people.

KPIX-TV reporter Joe Vazquez and photographer John Anglin were at the Oakland Library on Feb. 24, conducting interviews when a car pulled up and two people got out, one holding a gun. The people told Vazquez and Anglin to give them their car.

The news crew gave up their equipment. Then one of the robbers exchanged fire with security guard Matt Meredith, wounding Meredith in the leg.

“John abandoned the camera, took cover inside the news van where I was and told me to get down,” Joe Vazquez wrote on Twitter. “We heard a flurry of loud gunshots. Very close! More shots, I saw a guy drag the camera away and saw our guard Matt was hit. Quickly called 9-1-1.”

Vasquez posted video footage from the scene showing paramedics treating Meredith and said the wounds weren’t life-threatening. Meredith is a retired Berkeley police officer who was serving as a guard for the news crew.

Thank you, friends, for your well wishes. Our guard was shot today in Oakland while we were on assignment covering the Oakland teachers strike. We believe his wounds are not life threatening, thank God. Photographer John Anglin was robbed at gunpoint. 1/3 pic.twitter.com/TP225CUJNQ

John abandoned the camera, took cover inside the news van where I was and told me to get down. We heard a flurry of loud gunshots. Very close! More shots, I saw a guy drag the camera away and saw our guard Matt was hit. Quickly called 9-1-1. pic.twitter.com/spinXPTiAC

Alameda County Sheriff spokesman Sgt. Ray Kelly told CBS that one of the suspects was arrested about an hour after the robbery.

The 21-year-old, who has not been publicly identified, walked into Highland Hospital seeking treatment for several gunshot wounds.

Deputies detained the man and he was arrested by Oakland police officers in connection with the shooting.

About two hours later, Oakland Police Department officers spotted a Lexus believed to be involved in the shooting, leading to the driver crashing. The driver was arrested.

Surveillance footage showed the sedan traveling at a high speed and weaving through traffic before slamming into parked cars.

Oakland Police spokeswoman Johanna Watson said that officers recovered the stolen camera. On Monday, KPIX said in an update that Meredith is recovering in the hospital.