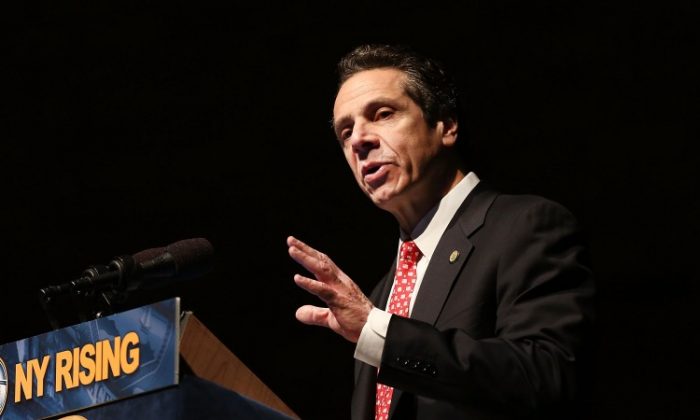 The New York State United Teachers (NYSUT), which described the cap as unconstitutional, filed a lawsuit Wednesday in the State Supreme Court in Albany. The suit claims that the cap maintains the inequality between wealthy and poor school districts.

“We believe very strongly in the principle that every student, no matter where they live or go to school, should have the opportunity to receive a quality public education,” said NYSUT President Richard C. Iannuzzi in a Feb. 20 media release.

“In challenging the constitutionality of the tax cap, we are fighting for that principle,” he added, “just as we are fighting for the democratic principles of ‘one person, one vote’ and for the right of citizens, through local control of their schools, to determine for themselves how much they want to spend on their own community’s schools.”

The measure took effect after it was passed in 2011, capping real-estate tax increases at 2 percent or the rate of inflation—whichever rate is lower.

Gov. Andrew Cuomo has said that the measure is needed to keep state property taxes low.

“I’m not going to go to New Yorkers today and ask for tax increase after tax increase,” said Cuomo at a Wednesday press conference in the Bronx, reported Bloomberg News. “We want to improve education, but we also want to make sure we’re not raising taxes to the point that people are leaving the state.”

Cuomo’s spokesman Richard Azzopardi described the lawsuit as “fiscally irresponsible” for New York State, adding that it will “undermine the progress that has been made,” reported Reuters.