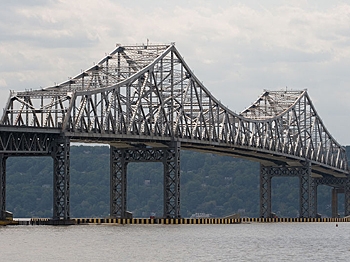 Christine Lin
Christine Lin is an arts reporter for the Epoch Times. She can be found lurking in museum galleries and poking around in artists' studios when not at her desk writing.
View profile
Follow
biggersmaller
Print
NEW YORK—Instead of remodeling the Tappan Zee Bridge connecting Rockland and Westchester counties, the New York State Department of Transportation (NYSDOT) will build a completely new one that accommodates multimodal transportation, authorities announced Friday, Sept. 26.

Express buses will operate along I-287 between the two counties after the bridge opens; a commuter light rail will also run on the bridge that will connect riders to the Grand Central Terminal in Manhattan and Metro North Lines.

With multiple transportation options, travelers would be more encouraged to get out of their cars. Other possible options include a double-deck bridge and lanes to accommodate bikers and pedestrians.

The 3.1-mile bridge was completed in 1955. Since then, it has fallen into a state of disrepair. Anywhere between 140,000 and 170,000 vehicles cross the bridge each day, according to the Tappan Zee Bridge/I-287 Environmental Review website (www.tzbsite.com)

A 2004 report from the New York State Thruway Authority showed that the bridge has “cracked columns, steel beams eaten clear through by rust, and off-center support bearings missing as much as 40 percent of their concrete footings,” wrote The Journal News, who pushed for the release of the report.

The new bridge is estimated to cost $6.4 billion while the express bus system will cost $2.9 billion and the commuter rail $6.7 billion. A detailed finance study is yet to be released. A draft of the Environmental Impact Statement is scheduled for release next year.

Groundbreaking is estimated to begin in 2012 after public hearings and environmental reviews. Public informational meetings will take place in Westchester, Rockland, and Orange counties at the end of October. Meeting details can be found at the NYSDOT website (nysdot.gov) under News&Events.