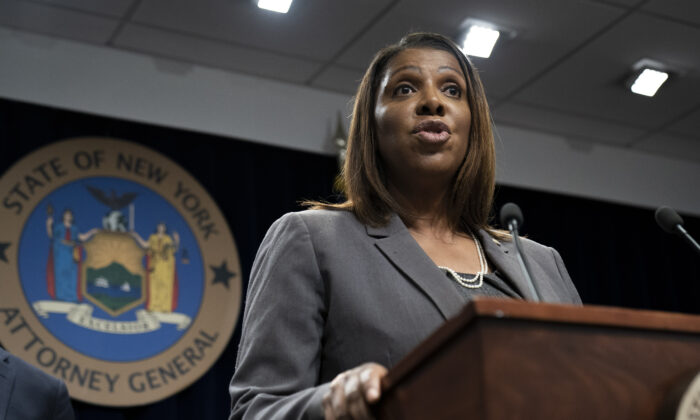 New York Attorney General Letitia James announced on Feb. 10 that she’d filed a lawsuit against the Trump administration over a new rule that bars residents of the state from participating in the federal government’s Trusted Traveler Programs (TTP).

Under the new policy, which came into effect on Feb. 6, New York residents are no longer eligible to apply for or renew their membership in programs such as Global Entry and other programs that allow for faster entry to select countries for preapproved travelers.

The Department of Homeland Security (DHS) said the policy was in response to a recent New York state law that prohibits U.S. Customs and Border Protection (CBP) from accessing information, such as criminal histories, maintained by the New York Department of Motor Vehicles (DMV). Without this information, the CBP is unable to complete security checks for its TTP applications and renewals submitted by New York residents, the department said.

The law, known as the Driver’s License Access and Privacy Act, or the Green Light Law, allows individuals to obtain a New York driver’s license without a Social Security number, regardless of their citizenship or lawful status in the United States. It also bars the release of the applicant’s personal information to federal immigration authorities except when requested under a court order or judicial warrant. It was enacted in June and took effect in December.

James has claimed that the administration’s move was “political retribution for the State’s enactment of legislation that the federal government disfavors.” She argues in her complaint (pdf) that the administration’s decision to bar New York residents from the programs poses a threat to New York residents’ safety and the state’s economy; directly harms hundreds of thousands of individual residents; and interferes with New York’s rights as a sovereign state.

“New Yorkers will not be held hostage by an Administration intent on restraining the sovereign rights of states, while it simultaneously enacts discriminatory policies across the country,” James said in a statement.

James argues that the policy contravenes the Intelligence Reform and Terrorism Prevention Act of 2004, which called on the DHS to create an international registered traveler program for use by all states and territories of the United States. She also said the program is punitive in nature and is intended to “single out” New York and force the state to change its policies to conform with federal ones.

Acting Homeland Security Secretary Chad F. Wolf explained in a statement on Feb. 6 that the federal government was forced to make the policy change to “ensure the integrity” of their travel programs. He said the CBP uses the data shared by the DMV for national security purposes to ensure safe and lawful trade and travel, helping officers to make an evidence-based assessment of individuals seeking to enroll in the program.

“It’s very clear: this irresponsible action has consequences,” Wolf said about the Green Light law. “An aspect of the law which I’m most concerned about is that it prohibits the DMV from providing ICE and CBP with important data used in law enforcement, trade, travel, and homeland security. ICE uses the information as they investigate and build cases against terrorists, and criminals who commit child sexual exploitation, human trafficking, and financial crimes. Unfortunately, because of this law, they can no longer do that.”

The CBP expects the move to affect up to 200,000 New York residents who are seeking to renew their membership. The policy change will also affect vehicle exports because the state law hinders the DHS from validating documents used to establish vehicle ownership.

Wolf said in a more recent statement on Feb. 9 that the TTP ban had nothing to do with illegal aliens receiving driver’s licenses.

“NY is the ONLY state to shut off CBP [Customs and Border Protection] access to DMV records used for law enforcement purposes in our homeland security mission,” Wolf wrote on Twitter. “Without access, CBP cannot vet Trusted Traveler applicants. It’s that simple.”

“I made clear to the governor yesterday that suspending Trusted Traveler Programs for NY had nothing to do with driver’s licenses and everything to do with the breakdown in information sharing,” he added in another statement.

The DHS did not immediately respond to a request for comment on the lawsuit.