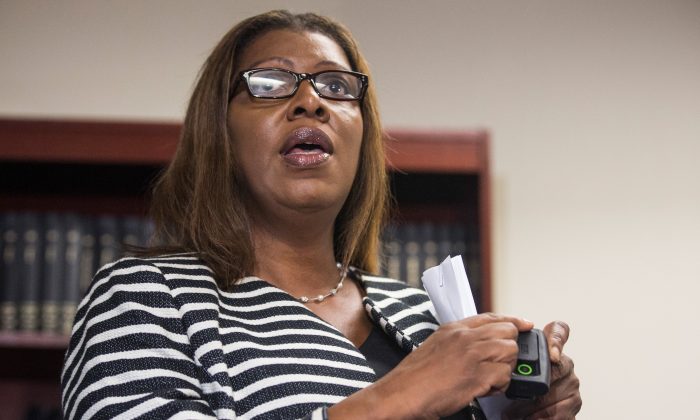 James’s office accuses Amazon of violating state labor laws by “repeatedly and persistently [failing] to comply with its obligation to institute reasonable and adequate measures to protect its workers” from the pandemic at a Staten Island fulfillment center and a Queens distribution center, both in New York City.

“Amazon’s flagrant disregard for health and safety requirements has threatened serious illness and grave harm to the thousands of workers in these facilities and poses a continued substantial and specific danger to the public health,” the lawsuit, filed Feb. 16, states (pdf).

The action follows days after Amazon filed a preemptive lawsuit in an attempt to block James from continuing an investigation of the company. The business argues that James lacked the jurisdiction to regulate its workplace safety measures and accuses her of subjecting the business to an “inconsistent and unfair standard for workplace safety” by forcing it to comply with an “exorbitant” list of demands.

“The OAG, without jurisdiction, is demanding relief that is not appropriate or warranted and is threatening to publicly sue if Amazon does not submit to the OAG’s unreasonable terms. The OAG’s threats and unwarranted demands are not tethered to the facts or the law and thus Amazon must now seek relief in this Court,” according to Amazon’s filing.

In a statement to The Epoch Times, Amazon spokesperson Kelly Nantel disputed the claims in James’s filing.

“We care deeply about the health and safety of our employees, as demonstrated in our filing last week, and we don’t believe the attorney general’s filing presents an accurate picture of Amazon’s industry-leading response to the pandemic.”

According to James’s complaint, Amazon failed to comply with cleaning and disinfection standards when infected workers were present in its facilities. The company also failed to identify and notify potential contacts of infected workers, failed to ensure its operations allowed employees to take time to “engage in hygiene, sanitation, social-distancing, and necessary cleaning practices.”

James also accused Amazon of taking “retaliatory action to silence workers’ complaints,” citing the firing of employee Christian Smalls, who organized a walkout to protest conditions at the workplace. The company also issued a final written warning to employee Derrick Palmer, who accused the company of having poor contact tracing.

“Over the course of the pandemic, Amazon netted more than $130 billion in profits from online sales—representing 35 percent growth from its pre-pandemic earnings and a 10 percent higher growth rate than in prior years—at the expense of its frontline workers who have experienced significant risks of COVID-19 infection while working at Amazon,” the lawsuit states.

The complaint was filed in the Supreme Court of the State of New York.

Amazon said in October last year that nearly 20,000 workers had tested positive or were presumed to have COVID-19, the disease caused by the CCP (Chinese Communist Party) virus.

Article updated with an emailed statement from Amazon.