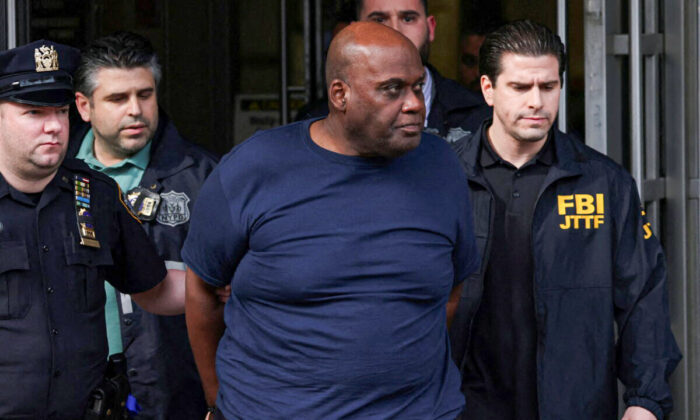 Frank James, the suspect in the Brooklyn subway shooting walks outside a police precinct in New York City on April 13, 2022. (Andrew Kelly/Reuters)
Crime and Incidents

Frank James, 62, was indicted on May 7 in the U.S. District Court for the Eastern District of New York. He faces charges of a terrorist attack or other violence against a mass transportation system, as well as one count of discharging a firearm during a crime of violence.

If convicted, both charges carry a maximum sentence of life in prison. The weapons count has a 10-year mandatory minimum sentence.

During the April 12 attack, James is accused of opening fire inside a subway car and setting off smoke bombs. While 10 people were wounded by gunfire, 13 others were injured in the panic-induced rush to get out of the smoke-filled train.

James was arrested about 30 hours after the attack. Police recovered the gun from the scene along with ammunition, fireworks, gasoline, a hatchet, and a torch.

According to Andy Ngo, editor-at-large at The Post Millennial, James has previously made comments against supporters of former President Donald Trump, characterizing them as racist.

“If you say you like Trump ‘because he speaks what’s on his mind,’ the rest of us know that’s code for ‘I like [homey] because he’s a … racist and so am I,’” James said in one of his 2015 social media posts.

James has criticized New York Mayor Eric Adams, accusing him of imitating white people. He’s also known to have made racist comments against various groups in the past while propagating black nationalist ideologies.

“You got your Ph.D. career and nice shoes. You got an education but now you’re just a carbon copy of the person who made you a slave. … You’re there to serve these,” he said, according to the New York Post.

James has posted material linked to the Black Panthers, Black Lives Matter, the Black Liberation Army, and the Nation of Islam on his social media accounts. In one video, James criticizes newly confirmed Supreme Court Justice Ketanji Brown Jackson for marrying a white man, since he’s an “enemy.”

“You hear black people [inspired by Jackson] say my daughter … dreaming to be a part of something that does not want you [to] be a part of it. … You’re not white, you’re not European. … You want to force yourself on these people and they’re going to kill you,” he said, the New York Post reported.

James also has a history of posting pro-Fidel Castro and communist posts. In one video posted by Ngo on Twitter, James can be seen using obscene words against white people, “slant-eyed” people, and Spanish-speaking people.