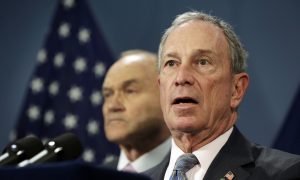 It may soon be illegal to own machetes in New York State.

State senator Tony Avella, who represents northeastern Queens, told the New York Daily News Thursday that he plans to propose legislation that will punish those in possession of a machete with a year in jail.

Avella got the idea for the legislation after the death of a Long Island teen in July last year, who was hacked by a man with a machete, according to the Daily News report.

“The fact that anyone can easily purchase this potentially lethal tool is just crazy,” Avella said.

Current state law prohibits the possession of any firearms, as well as weapons like gravity knives, switchblade knives, and cane swords. Those violating the law are punishable by up to one year in jail, three years probation, or a combination of jail time and probation.

Those who possess daggers, dangerous knives, razors, or “any other dangerous or deadly instrument or weapon with intent to use the same unlawfully against another” will also be punished.

In October, a man was stabbed and slashed in the head, neck and torso with a machete, after an argument inside a Bronx restaurant got ugly.

Police officers were also threatened by a Brooklyn man wielding an 18-inch machete in 2010. Officers shot the man in the leg to prevent him from attacking.