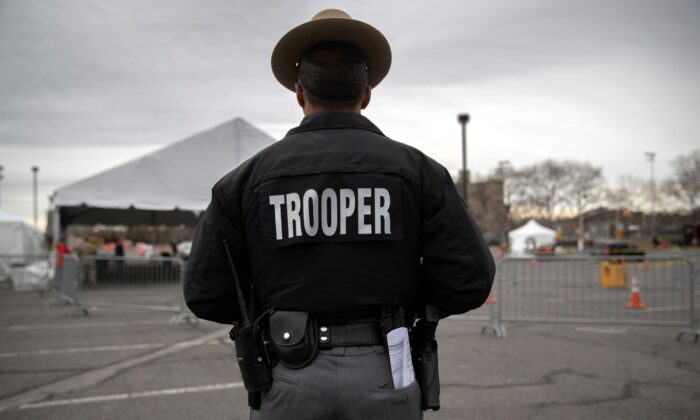 The agency responsible for managing the New York State Fair has made a U-turn to allow off-duty law enforcement members to continue to carry firearms at the upcoming state fair, according to a department spokesperson.

“The fair’s long-standing rules of conduct state that firearms are prohibited on the Fairgrounds, with exceptions for members of law enforcement and participation in the gun show,” said an Aug. 10 email from the New York State Department of Agriculture and Markets (NYSDAM).

“We have engaged with law enforcement to inform them of provisions we have in place to allow off-duty officers to carry their personal or service firearms while visiting the fair.”

However, just the day before, the New York State Police told the law enforcement community in an email that NYSDAM decided not to allow off-duty officers to carry firearms at the fair.

“This is not a State Police policy. However, we will be getting called to the gates wherever a firearm is detected,” according to the email obtained by The Epoch Times.

The ban was a break from tradition as off-duty officers historically had been allowed to carry guns there, according to Peter Kehoe, executive director of the New York Sheriffs’ Association.

“An officer doesn’t suddenly become a menace just because he is not on the police payroll at that particular moment.

“The downside of the policy, of course, is that the fair-going public doesn’t get the protection of trained, armed police officers who can instantly, effectively respond to any emergency,” Kehoe told The Epoch Times.

He said pushbacks from the law enforcement community likely caused the agency to ditch the ban.

Mount Hope Police Department chief Paul Rickard told The Epoch Times, “It was a poor policy, and whoever was advising them was giving them bad advice.

“If there is an active shooter and you have armed off-duty officers, they can immediately act. The ban just made the public less safe.

“I personally would not go to the fair based on that alone,” Rickard added.

NYSDAM had enacted the new ban without revising the state fair’s rules of conduct, which allows for officer carry in general without differentiating between on-duty and off-duty officers, based on a review of the rules over the past few years.

The rules ban private citizens from carrying weapons of any kind on the fairgrounds, including firearms, knives, sand bags, razors, and imitation pistols.

An agency spokesperson told The Epoch Times that it’s a top priority to keep fairgoers, vendors, and all fair staff safe. It has put up the most enhanced security system this year, including a new high-tech weapon detection system, according to the spokesperson.

However, the law says the above restrictions do not apply to active and retired police officers, security guards, and active-duty military personnel.

The Great New York state fair typically attracts more than 1 million visitors every year and is set to run from Aug. 24 to Sept. 5 in Syracuse.

With a history going back to 1841, it is one of the oldest state fairs in the nation.