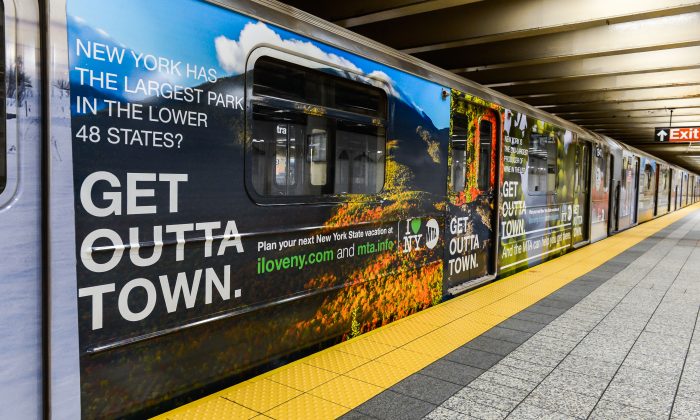 NEW YORK—New York state is ramping up its I Love NY ad campaign in hopes of luring more tourists to destinations upstate.

State officials and Thomas Prendergast, chairman of the Metropolitan Transportation Authority (MTA), announced the expansion of the campaign on Oct. 21 in front of a Grand Central subway shuttle train wrapped in an ad featuring New York’s stunning fall foliage.

Before Cuomo took office, the I Love NY program was cut off from funding, while the state’s tourism promotion efforts were nearly nonexistent, according to Vlasto.

Prendergast said the MTA is the perfect platform for the campaign as it moves 8.5 million people around the city each day.

“This morning, however, we’re taking a new collaboration to get people out of town,” Prendergast said.

Since Long Island Rail Road and Metro-North Railroad trains can be used to get to most upstate destinations, the campaign promotes both the destinations and the ways to get to them.

“One of the most iconic things people come to New York to see is its subway,” Prendergast said in the echoing Vanderbilt Hall of the Grand Central Terminal.

Prendergast noted tourist destinations like the Long Island beachfront, the Hudson Bridge in Poughkeepsie, art museums in Huntington, and the Culinary Institute of America in the Hudson Valley.

The campaign will also include out-of-state promotion, including overseas media markets in Canada, the United Kingdom, and Europe.

The tourism sector is the fifth largest employer in the New York providing over 700,000 jobs.