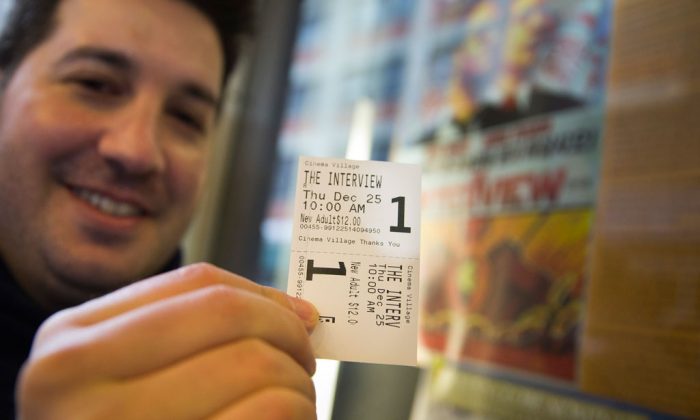 Derek Karpel holds his ticket to a screening of "The Interview" at Cinema Village movie theater in Manhattan, N.Y., on Thursday, Dec. 25, 2014. Sony canceled the film's Christmas Day release after threats of violence by hackers linked to North Korea, but the release was reinstated in some independent theaters. (AP Photo/John Minchillo)
Business

New York Showings of ‘The Interview’ Sell Out

NEW YORK—”The Interview” opened in several New York City theaters on Christmas to enthusiastic crowds as interested in the world drama the film produced as anything on the screen.

“The whole story is like a movie,” Nick Ratner said of the swirling controversy as he prepared to watch the film at Cinema Village East in Manhattan’s East Village neighborhood Thursday morning. “I am sure someone has already optioned it for a movie.”

“We are taking a stand for freedom. We want to show the world that Americans will not be told what we can or cannot watch,” said the theater’s manager, Lee Peterson.

We are taking a stand for freedom.
— Lee Peterson, manager, Cinema Village East

He said most of the day’s seven showings were sold out before noon at the theater, which had been in contact with the FBI and its local New York City police precinct, though there were no credible threats.

A week ago, the future of the $40 million film in theaters nationwide seemed in jeopardy after Sony Pictures Entertainment canceled its scheduled holiday opening when hackers released internal Sony documents and threatened moviegoers with violence.

Sony reversed its decision after facing criticism from many, including President Barack Obama.

The film, starring Seth Rogen and James Franco, is being shown in some independent theaters and has been released on digital platforms.

Some people who watched the movie Thursday in Manhattan gave it better reviews than most critics.

“I really expected it to be pretty stupid, but there were some funny moments to it,” Derek Karpel said. “It’s fun. People should go.”

Karpel, a 34-year-old attorney who lives nearby, said he saw his theater visit as a way to support freedom of expression.

“I thought it was important to see it in the theater, to show our faces there,” he said.

Michael Bancas, a former Sony employee, said seeing the film was a way to support those who work at the company. He wasn’t disappointed.

“The movie was a little over the top, but it was interesting. There were a lot of laughs. It was funny,” he said.

Kim Song, a North Korean diplomat to the United Nations, has condemned the release, calling the movie an “unpardonable mockery of our sovereignty and dignity of our supreme leader.” But Kim said North Korea planned only condemnation, no “physical reaction.”