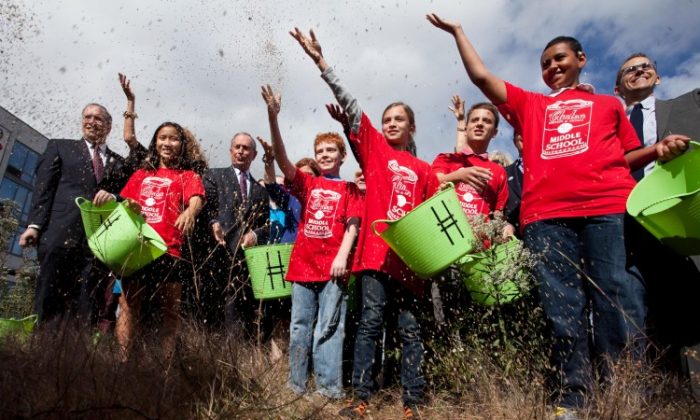 A view North, across the rail yards and the Hudson Yards, from the third section of the High Line. (Amal Chen/The Epoch Times)
US

NEW YORK—Strolling high above the sidewalks of Manhattan for a full 22 blocks without crossing a single street is a step closer to reality. Already one of the city’s most popular destinations, the High Line will be expanded, starting late October and opening early 2014, officials announced Thursday.

The third and final section will run from a spur at the intersection of 10th Avenue and 30th Street in a horseshoe, slowly turning toward the Hudson River to run parallel with 12th Avenue before curving inland into 34th Street.

“This is a really exciting day for us,” said Robert Hammond, co-founder of Friends of the High Line, at an event Thursday. “Our ultimate goal has always been to open the High Line all the way to 34th Street, and there were times we thought it might not happen—that it was too complex, too challenging—but here we are to celebrate the beginning of construction.”

After years of wrangling with different parties to stop the destruction of the High Line when it was still a derelict railway, co-founders of Friends of the High Line, Hammond and Joshua David, gained support from elected officials and community members and opened the first section in 2009.

The co-founders visited the southern sections of the High Line many times, “but we were never able to get past the tall, steel fence,” said David.

Then they noticed a small opening under the fence, and got permission from their guide and then-owner of CSX Real Property to “slither underneath through the gravel and bits of metal and glass,” David said. “It was only then that the full opportunity of the High Line became clear—we had the chance to create a mile and a half long walk, a real New York journey, through three Manhattan neighborhoods.”

Completion of the vision has taken more than a decade. Funds raised in the first year after Friends of the High Line was founded in 1999 were used to take then-Mayor Rudy Giuliani to court twice, saving any of the track from being torn down, according to David’s father, John, who lives near the High Line.

The tide eventually turned and scores of elected officials and philanthropists have supported the project. Fashion mogul Diane von Furstenberg and husband Barry Diller have donated tens of millions to the project.

“It’s very nice to have dreams and make them happen, and this is a perfect example of a dream we made happen,” said von Furstenberg at Thursday’s event.

Four tours in Oct. will be the last chance for the public to see the High Line in its current state.

Plant overgrowth throughout the third section includes mullein and several apples trees. Bottles and pieces of wood sit next to parts of a set of railroad tracks. About half of this section, beginning just west of 11th Avenue, will be kept in a fairly natural state for five to ten years with just a walkway running through it.

“[This] will give people the experience of walking up here much more like what we’re standing in today, part of the original High Line,” said David. “I think it’s something that people will really find a unique, enjoyable experience.”

It will also allow time for groups to raise the money needed for the final development.

For the $90 million needed to build on the third section, Friends of the High Line will contribute $20 million, which they are still raising. The city has pledged $10 million, and Related Companies and Oxford Properties Group, who are constructing buildings in the adjacent Hudson Yards, are pledging $27.8 million.

Designs for the third section, by landscape architects James Corner and Ric Scofidio, were unveiled in March at a community meeting. The design has changed little since then but details are still being refined, according to David.

Besides running East-West in parts, the third section presents areas different from the first two sections, such as the 10th Avenue spur, an area that evoked many design ideas. They were narrowed down into three: an amphitheater, a flex pavilion, or a floating plane.

“The floating plane is really the simplest [idea],” said Corner at the March meeting. “Float a deck four feet above the High Line … so that you are getting raised views of the west to the river, east into the city, and north and south along 10th Avenue.”

The third section of the High Line, along with the extension of the number 7 train and the Hudson Yards development, “will bring new residents and businesses and jobs to an area that has long been underused in our city,” said Mayor Michael Bloomberg.