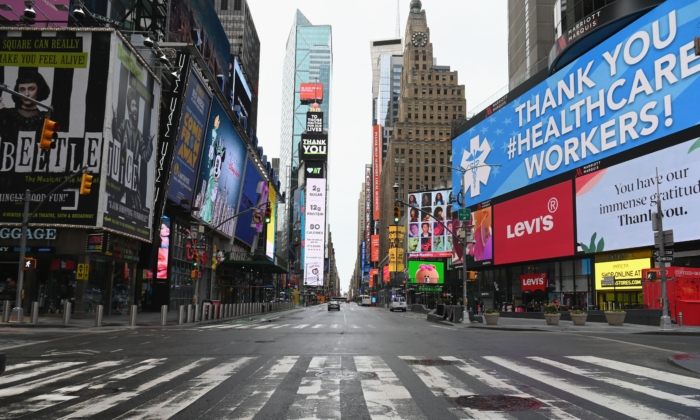 New York State notched another grim record on April 3 with Gov. Andrew Cuomo reporting that 562 people died from the CCP virus the day before.

A total of 2,935 people have died in the state since the outbreak of the Chinese Communist Party (CCP) virus, commonly known as the novel coronavirus.

The state remains the epicenter of the pandemic with more than five times the deaths of New Jersey, the second worst-hit state nationwide. New York had 102,863 cases of COVID-19 on April 2.

The state also reported the most hospitalizations—1,427—in a single day for April 2, just 15 cases more than the previous record set on March 30.

However, the daily number of people discharged increased for the fifth straight day, with 1,452 COVID-19 patients leaving hospitals on April 2. This is the first time since March 23 that the state reported more discharges than hospitalizations.

Cuomo urged companies in the state to transition to manufacturing the essential supplies necessary for some of the hospitals handling the surge of patients: masks, gowns, and protective equipment.

“It can’t be that companies in this country and in this state can’t transition to making these supplies,” Cuomo said.

Companies large and small have transitioned their manufacturing lines to make masks and gowns, including Brooks Brothers, L.L. Bean, Under Armour, and General Motors.

President Donald Trump announced on April 3 that the 2,500-bed temporary hospital built by the Army Corps of Engineers in New York City’s Jacob Javits Center will be used solely for COVID-19 patients. Cuomo said that he personally asked Trump to convert the hospital for this purpose because the federal authorities were “not eager” to take the step.

“That adds 2,500 beds so that is a very big deal. And I thank the president for doing it. He did it despite the federal agencies not eager to do it and he did it quickly, so I thank him for that,” Cuomo said on April 3.

The governor noted that there is no overflow of regular patients due to the statewide shutdown. Both car accidents and crime have dropped, Cuomo said.

Instead, the hospitals are handling an influx of COVID-19 patients. The governor noted that the state still does not have enough ventilators. He announced that he will be signing an executive order granting state authorities the power to take ventilators and essential supplies from institutions which are not using them. The items seized will either be returned or reimbursed. The National Guard will pick up the equipment and redeploy it where it is needed.