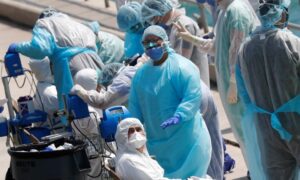 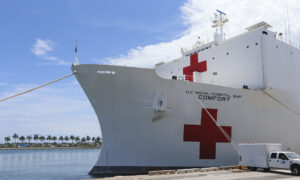 Navy Hospital Ship to Arrive in NYC on Monday
0 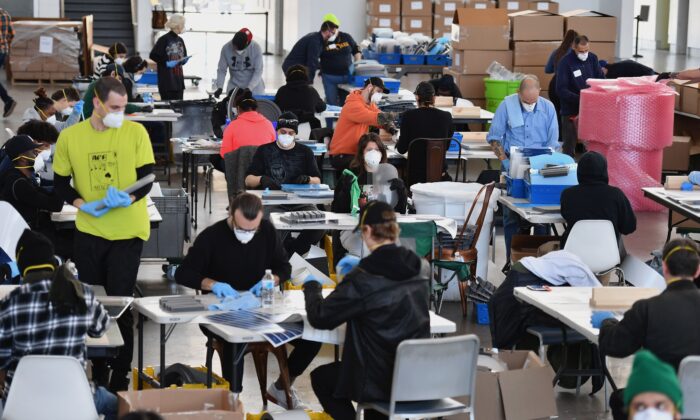 The state’s death toll rose to 519 as overall cases increased to 44,635, by far the most in the nation, prompting some states to crack down on travelers arriving from New York.

The death toll “is going to continue to go up,” New York Gov. Andrew Cuomo said at a press conference at the Javits Center in the city’s Manhattan borough, noting a number of patients are in hospitals for 20 to 25 days on ventilators.

“The longer you are on a ventilator, the less likely you are going to come off that ventilator,” he said.

Some 6,481 patients are now in state hospitals, the bulk in New York City. Only 496 COVID-19 patients were hospitalized in the state 10 days ago.

The rate of hospitalizations, though, has slowed in recent days, going from a doubling in hospitalizations every two days to every four days, which Cuomo called “good news.”

“It’s still doubling, and that’s still bad news, because it means you’re still moving up towards an apex,” he added.

“The rate of the increase is slowing but the number of cases are still going up.”

The number of patients in intensive care units in the state has risen by 290 overnight to 1,583 and the number of people discharged from hospitals hit 2,045, an increase of over 500.

About four in five people who contract the new illness don’t require hospitalization and get better through rest and supportive care at home.

The majority of patients requiring hospitalization are those who are older or have underlying health conditions. People 75 or older have so far constituted about half of all deaths in New York City.

Cuomo said the gap between New York and other states in both categories stems from the density in New York City as well as the slew of international visitors and residents.

Officials in the city also encouraged people to attend parades and other events, and go out to to eat, as late as the first week of March, well after public health experts warned of the high transmissability of the virus.

New York has said it needs 30,000 ventilators to care for patients when the virus hits its apex in the state, a figure questioned by President Donald Trump late Thursday. The state approved a method to use a single ventilator to care for two patients this week in a bid to make up for the current shortfall in the machines, which help people breathe.