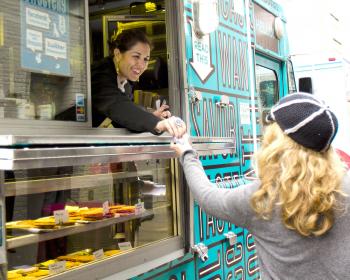 MACAROON HAND-OFF: Samira, co-owner of Sweetery, gives a coconut macaroon to Carly Caryn on Monday at the Food Truck Rally in West Chelsea on 21st and 22nd Streets between Tenth and Eleventh Avenues. (Phoebe Zheng/The Epoch Times )
US

“I would say in the past two years it's really taken off,” said food critic Meryl Pearlstein, who writes articles for publications like Fodor’s and Travel and Food Notes. “Before it was always hot dog stands, now it's much more than that, as you can see.”

The first stop for this reporter was Katchie Truck, making its premiere into the food truck scene with “you won't miss the meat” veggie sliders. The truck uses many ingredients from its year-round organic farm, Katchkie, located 2.5 hours outside the city. For example, they used locally foraged mushrooms and farm-grown spinach in the veggie sliders.

“You can never have too many tomatoes,” said owner Liz Newark. They also make their own lasagna with homegrown onions, garlic, eggplant, and tomatoes. The pasta is made from locally obtained wheat, making it a “100-mile” local-based diet.

“It's a really fun way to eat out and eat good food, and it's less expensive than going out to a whole big meal,” said Tiffany Herklots, director of Communications for Zagat's Survey.

After Katchie, I sampled a coconut macaroon with white chocolate inside from Sweetery, formerly known as Street Sweets. The truck, equipped with its own oven for fresh baked goods is owned by Samira, who was serving the macaroons. Samira and proprietor husband Grant Di Mille work the business together. While munching on the macaroon and chatting with Samira, writer Carly Caryn walked up for her own coconut treat.

“I got a couple things from you a couple weeks ago, you’re my new favorite food truck. I was dreaming about it,” Caryn said.

Sweetery uses all natural ingredients, raw sugar, and organic milk in its products and the truck runs on bio-diesel fuel. They boast over 9,000 followers on Twitter, the main form of contact most food trucks use to communicate where they will be and when.

“Social networking is a very big part of our business,” Samira said. The couple’s background in marketing and advertising has helped them in their venture, from eye-catching truck designs to expanding into catering and corporate events.

Last, I had a potato and pea Kati roll from Desi Food Truck. Costing between $4 and $5.50, Kati rolls are Indian griddled flat bread with meat or vegetarian filling and a coriander/mint sauce wrapped inside the roll. It was small but tasty.

“You get to try all different kinds of cuisine, all different styles of cooking, and it's little bites from around the world,” said Herklots.

Food trucks can be followed on Twitter and Facebook, spotted around the city, and are easy to get addicted to. They even have their own annual awards ceremony, the VENDYs. The competition is getting stiffer, which for the customer means the food and treats are getting better and cheaper.