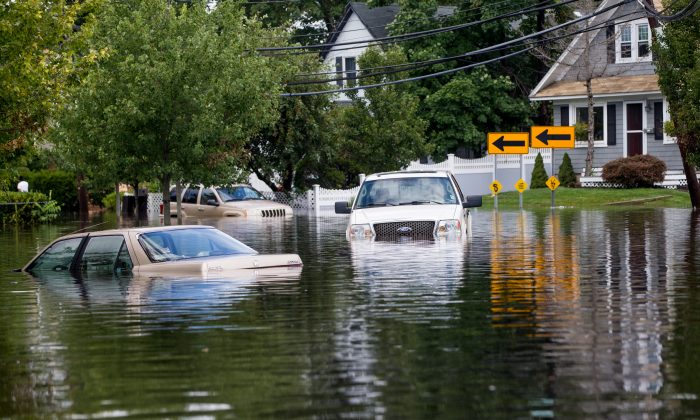 NEW YORK—The Northeast, including New York City, has seen an increase of 71 percent in the amount of rain experienced in the heaviest 1 percent of rain events over the last 50 years, according to a report released by New York Attorney General Eric Schneiderman Wednesday.

The report, citing data from the federal interagency US National Climate Assessment, noted that within the past four years, New York City has seen unprecedented levels of rainfall. “The four years with the most occurrences of events with 2 or more inches of rain (1983, 1989, 2007, and 2011) in New York City have all occurred since 1982,” it stated.

The map shows percent increases in the amount of precipitation falling in very heavy events, defined as the heaviest 1 percent of all daily events, from 1958 to 2012 for each region of the United States. (Source: Current and Future Trends in Extreme Rainfall Across New York State)

The frequency of extreme rainfall could increase 300 to 400 percent by the latter part of this century if the world’s greenhouse gas emissions continue their upward trend. In other words, a storm expected every 20 years will occur every six instead.

For instance, a storm three weeks ago hit Islip and Babylon, Long Island, costing over $30 million in damages. The area saw a total of 13.57 inches of rainfall, the equivalent of a summer’s worth of rain within a few hours.

“Climate change is already affecting each of us,” said Schneiderman, during a twenty-five minute keynote speech at Pace University. “And it will get worse very quickly if we do not mobilize.”

While New York has seen a chain of extreme weather events in the past four years, Schneiderman said that none of it was concrete evidence of climate change.


“We know that the pattern and impact of more frequent and more extreme rainfall in our state; it’s undeniable,” said Schneiderman.