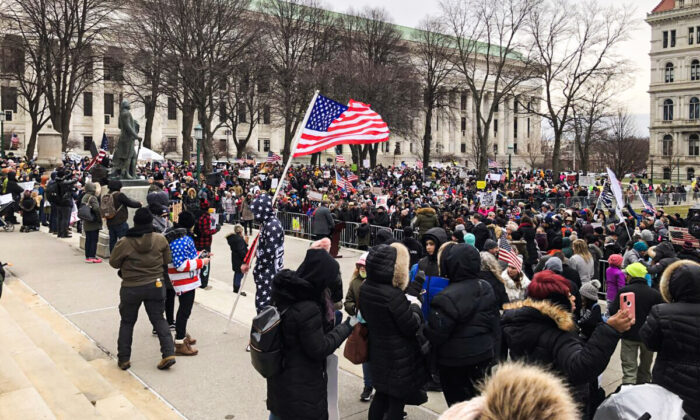 New York Protesters Rally in Albany Against Vaccine Bills: ‘We Need Civil Disobedience in This Country’

ALBANY, N.Y.—New York state lawmakers returning for the 2022 legislative session were met by hundreds of demonstrators who gathered outside the state Capitol to protest a host of measures that would tighten already strict COVID-19 vaccine rules across the state.

As Gov. Kathy Hochul delivered her first State of the State address, the protesters on the west lawn of the Capitol building spoke out against her decisions related to the pandemic response, including the extension of the mask mandate through Feb. 1 and the vaccine mandate for health care workers—now temporarily blocked by a judge, among other policies her administration inherited from the Andrew Cuomo era.

One of the event’s speakers was Michael Kane, the founder of NY Teachers for Choice, an advocacy group fighting New York City’s COVID-19 vaccine requirements for public school teachers. Kane told the crowd that the city denied his request for a religious exemption because the Roman Catholic Church favors vaccination.

“The New York City lawyers actually said to me, because the pope recommends vaccination, Mr. Kane should be vaccinated,” he said. “What New York City and all of their expensive lawyers don’t know is that no man, no building, no institution stands between me and my God.”

In a call to action, Kane encouraged New Yorkers, and residents of other cities that are trying to adopt the New York City model, to resist the differential treatment of citizens based on vaccination status.

“The vaccine passport nonsense is spreading: Chicago, Boston, D.C. We need civil disobedience from East Coast to West Coast in this country,” he said. “Nonviolent civil disobedience is the way we do this, harking back to the [Civil Rights] movement from the 1960s: No to Segregation.”

Another speaker was Tramell Thompson, a New York City subway conductor and labor leader. In one dramatic moment during his speech, he ripped his own vaccination card as he condemned the vaccination requirement for transit workers.

“We have been telling Cuomo first that there should be no mandates. Now we’re telling Hochul that, because there should be a choice,” Thompson told a cheering crowd. “I’m fully vaccinated, but I’m against [vaccine] passports,” he said, as he started tearing his card into pieces. “I don’t care.”

The demonstrators also targeted several legislative proposals they said would violate their medical freedoms and parental rights. Among these measures are A8378, which would add COVID-19 vaccines to the list of required vaccines for all schools and colleges; A2240, which would mandate influenza vaccines for children attending day care; A8398, which seeks to repeal nonmedical exemptions to vaccines for workers and college students; and A3192, which would allow any person aged 14 and above to get government-required or -recommended vaccines without parental consent.

A protester told The Epoch Times that he believes New Yorkers would enjoy less freedom if these measures became law.

“This is the United States of America, not Russia or China,” said the protester, who brought his two homeschooled children to the rally. “We’re a free country, or at least, we used to be. It’s hard to turn the other way, and we don’t believe it.”

Another protester said she worries that the push for vaccine mandates and other public health restrictions opens a slippery slope for the government to take away more freedoms.

“I feel like we’re being coerced and forced into wearing masks and getting vaccinations, and we’re losing our freedom a bit at a time,” the protester told The Epoch Times, adding that she supports the rights of parents to make medical decisions for their children. “If we don’t stand up and protect our freedoms, they’re going to be gone and we won’t be able to get them back.”

At least three of the contested measures are sponsored by Democratic state Assemblyman Jeffrey Dinowitz. In an interview last year with The Journal News after he proposed A8378, Dinowitz characterized opponents of his bill as “anti-vaxxers.”