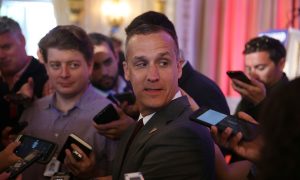 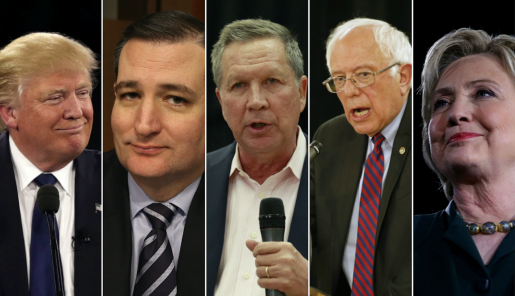 NEW YORK—Democrats clashed on a Brooklyn debate stage while Republicans courted donors in Manhattan as “New York values” framed the 2016 race for the White House Thursday night, just days before the state’s high-stakes presidential primaries in both parties.

As protests raged outside a state GOP gala, Republican front-runner Donald Trump delivered an impassioned defense of the city he calls home. The billionaire businessman praised the city’s response to the nation’s deadliest terrorist attacks in remarks designed to jab leading rival Ted Cruz, a Texas senator who has repeatedly condemned “New York values” in his push to defeat the New York real estate mogul.

“In our darkest moments, as a city we showed the world the very, very best in terms of bravery, heart and soul of America,” Trump charged. “These are the values we need to make America great again.”

Trump joined presidential contenders from both parties who hustled into New York City ahead of the state’s Tuesday presidential primaries, a critical test as both parties’ front-runners fight to beat back surging challengers. New conflicts flared between Democrats Hillary Clinton and Bernie Sanders in the Brooklyn debate as protesters clogged the Manhattan sidewalk outside a state GOP dinner featuring all three Republican White House hopefuls.

Trump was the target of rowdy protesters who hung an effigy of the billionaire businessman and chanted, “How do you spell racist? T-R-U-M-P.”

Florida state attorney Dave Aronberg declared police were right to charge Lewandowski with misdemeanor battery, yet the burden on prosecutors to prove the case was higher.

“Although there was probable cause to make an arrest, the evidence cannot prove all legally required elements of the crime alleged and is insufficient to support a criminal prosecution,” Aronberg said during an afternoon news conference.

Lewandowski initially denied grabbing the reporter before video surveillance surfaced of the early March incident. Trump accused the reporter of exaggerating and changing her story.

Prosecutors said Thursday that a simple apology might have avoided the criminal complaint. Lewandowski was “gratified” by the prosecutor’s decision, the campaign said in a brief statement declaring, “The matter is now concluded.”

Bernie Sanders Filled Washington Square Park, and Then Some

Rising tensions in the Democratic race spilled onto the debate stage Thursday in a debate faceoff featuring two candidates with deep ties to New York.

Sanders questioned Clinton’s judgment by questioning her support for the unpopular Iraq war and free trade agreements, as well as her willingness to accept money through a super PAC. Still, he backed away from previous statements questioning her qualifications, saying the former secretary of state does have the “experience and intelligence” to be president.

Clinton made little effort to disguise her irritation as Sanders challenged her qualifications. Clinton responded by casting Sanders as unprepared to implement even his signature policy proposals, including breaking up big Wall Street banks.

“I think you need to have the judgment on day one to be commander in chief,” she declared.

Front-runners Clinton and Trump hope New York’s April 19 primaries can propel them past stubborn challengers and into the general election. Preference polls show Clinton and Trump leading their respective contests.

Sanders, a Vermont senator who was born in Brooklyn, has been touting his local roots as he seeks to upset Clinton in New York. While he is on a winning streak in primaries and caucuses, he needs a big victory in the state to cut into Clinton’s delegate lead and slow her march to the nomination.

Trump, meanwhile, hopes New York marks an end to the worst period of his candidacy, a stretch that raised new questions about his policy abilities and revealed his campaign’s lack of preparedness for a delegate fight if the GOP race heads to a contested convention. A big victory in New York could increase his chances of clinching the nomination before the convention.

He dispatched aides to Capitol Hill Thursday in the first of what the campaign says will be a series of regular gatherings with lawmakers.

Trump adviser Ed Brookover said after the meeting that the billionaire businessman was on a “glide path” to reaching the 1,237 delegates needed to clinch the Republican nomination.

Meanwhile, Ohio Gov. John Kasich warned Republican donors that the party would “lose everything from the White House to the courthouse to the state house” if the wrong candidate wins the nomination.

Cruz made no mention of his “New York values” criticism. Instead, he called “New York City is hallowed ground” after the attacks of September 11, 2001 and cited the need for a strong military response to terrorism.

None of the three candidates received energetic responses, but Cruz, in particular, was frequently forced to talk over diners’ chatter and the clink of silverware.