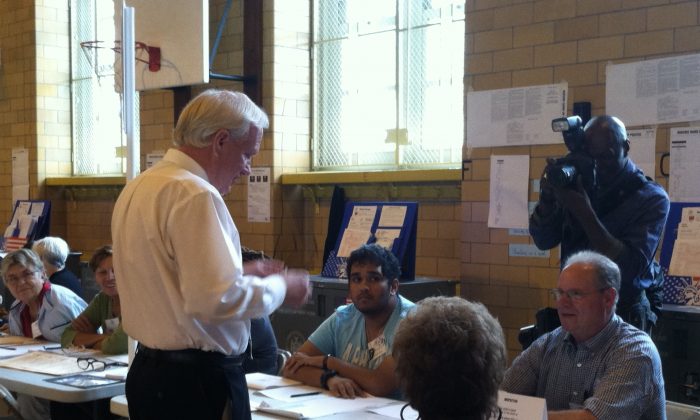 At P.S. 184 in north Flushing, Avella placed his ballot at around 10 a.m. on Tuesday, feeling optimistic about his chances—despite a small mishap when his ballot got jammed in the electronic scanner, though the machine counted it.

“Primary is traditionally a low turnout, so you always have a little trepidation, but based upon what I’ve heard—people have come up to me, whether it’s going door to door or at the supermarkets—we’re going to win this election,” he told reporters after voting.

Voters who are registered with a party get to vote for candidates in New York state offices. The biggest race is for governor, between incumbent Andrew Cuomo and Democratic challenger, Zephyr Teachout.

Avella spent most of his day in front of P.S. 169 in the Bay Terrace neighborhood, greeting voters and chatting with them.

Liu also has the support of labor unions like the AFL-CIO, while Avella has received several strong endorsements from Mayor Bill de Blasio and the city’s firefighter and police unions.

The IDC is a group of Democrats in the state Senate who agree to share majority control with Republicans. Avella spent recent weeks fielding Liu’s criticism that Avella betrayed the Democratic party by joining the IDC.

Avella again defended his IDC participation on Tuesday, saying that it was necessary in order to “represent this district and get things done.”

While campaigning, Avella said most voters did not ask about his IDC participation, but instead brought up problems in their district, such as malfunctioning traffic lights and the need for more parking lots.

Meanwhile, Liu has been criticized for using the state Senator campaign as a springboard for greater political ambitions, having just concluded a run for mayor in late 2013.

Rafael Moret, 72 and originally from Cuba, said he voted for Liu because he wanted to support a fellow minority. “We need more minorities in government. That’s the only way for us to get some respect,” he said upon voting at P.S. 169.

Murray Beltzer, 93, said he voted for Avella because the politician has represented the district for many years. Avella served the north Queens area as a city council member from 2002 to 2009.

“He does a hell of a job, regardless of party. That’s more important than being a politician, isn’t it?” Beltzer said, referring to Avella joining the IDC.

Because the IDC has agreed to re-join the mainline Democrats in the next session in January, Beltzer said he will continue supporting Avella.