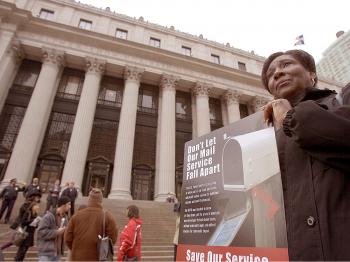 The H.R. 22 legislation will amend the 2006 legislation that mandated full funding of current and future USPS retiree health care benefits. Under the new legislation, the USPS will be allowed to draw current retiree payments from the presently established fund instead of having to wait until 2016, while continuing to fund health care for future retirees.

This change is projected to save $2.3 billion in 2009, and with increased savings expected over the next eight years. The H.R. 22 legislation is co-sponsored by 253 national representatives, including the majority of the congressional representatives in the New York metropolitan area.

Due to recent fiscal challenges, USPS plans to reduce the hours of operation at the James A. Farley Main Post Office from the current 24 hours, 7 days a week schedule to a 7 a.m.–10 p.m. weekdays and shorter hours on weekends. The USPS also plans to close the Columbus Circle, Sgt. Tejada, and Prince Street Stations in Manhattan.

The president of NYMAPU, Clarice Torrence, joined the rally held in front of the Prince Street Station on Wednesday to protest its closing that is planned for summer of 2009.

“Just three days before its newest rate increase goes into effect, the United States Postal Service is drastically cutting back service to the public at the main post office beginning May 9th,” said Ms. Torrence. “There is a bill before congress now, H.R. 22, which will provide necessary financial relief for the USPS enabling it to survive without all of these drastic cuts and it won’t cost the taxpayers one cent. I hope that pressure from the public who rely on the Postal Service will help motivate Congressmen Jerrold Nadler, Charles Rangel, and Anthony Weiner to sign on as co-sponsors to the bill,” she continued.

Ms. Torrence also participated in the informational picket with the members of the NYMAPU in front of James A. Farley Main Post Office on 8th Avenue in Manhattan to inform customers of the planned cutbacks. The NYMAPU represents clerks, maintenance workers, and motor vehicle operators in Manhattan, the Bronx, and two major facilities in Northern New Jersey.