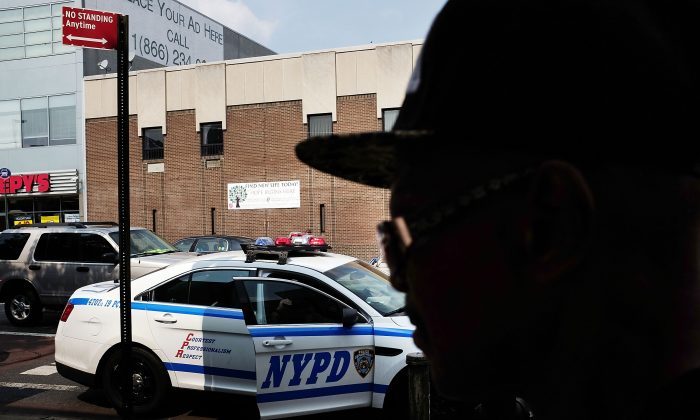 File photo of a New York Police Department police car patrolling an area that had witnessed an explosion in the use of K2 or "Spice," a synthetic marijuana drug, in East Harlem, New York City, on Sept. 2, 2015. (Spencer Platt/Getty Images)
US News

The group’s president was cited by the New York Post as saying that plans to legalize pot in the state amounted to an irresponsible “money grab.”

“We wanted to be on the record that we oppose it because it’s an act of total irresponsibility,” Michael Palladino, the head of the New York State Association of PBAs, said on Feb. 6.

“The Governor and lawmakers are trading public safety for a money grab to plug a budget deficit arising from mismanagement of taxpayer funds,” Palladino said. “Jeopardizing the public’s safety is not something cops support.”

The New York State Association of PBAs—formerly known as Metropolitan Police Conference—took the decision to voice its opposition to Cuomo’s proposal at the group’s meeting in Albany on Tuesday, the Post reported.

Gov. Cuomo, who previously denounced recreational marijuana as a “gateway drug,” has reversed his position on the issue.

The New York governor, who clinched an electoral victory in November for a third term, laid out a sweeping plan on Jan. 15, that includes establishing congestion pricing in New York, adopting an environmental platform known as the Green New Deal, and legalizing recreational marijuana.

The pot legalization plan would allow marijuana for use by those over 21 and include some form of wiping clean the records of those convicted for possessing the drug. The concept would also tax marijuana, projected to generate around $300 million per year.

Counties and large cities could, however, choose to opt out.

Here it is: Gov. Cuomo’s plan to legalize recreational use of marijuana for adults. pic.twitter.com/2eRnLEGYnw

The governor is operating with the first Democratic monopoly in the State Legislature in his eight years in office, facilitating legislative approval of Democrat-led initiatives.

“Last year, in 2017, 72,000 Americans OD’d on drugs,” he said, according to CNN’s Donald Judd. “In 2018, more people than that are ODing on drugs, have OD’d on drugs, and today incidentally, we are trying to legalize another addictive narcotic, which is perhaps the stupidest thing we’ve ever done,” he stated, presumably referring to marijuana. “We’ve got to fight that,” Bloomberg added.

Attendees at a Nassau County hearing on Feb. 6 voiced their fears that legalization would threaten public safety, Newsday reported, and that easy access to the drug would drag down the community’s quality of life.

According to the Newsday report, speakers at the legislative chambers in Mineola opposed Gov. Cuomo’s plan and urged the county to opt out of retail sales.

James McDermott, president of the Nassau Police Benevolent Association, said, “Let’s use that opt-out clause if there is one, if it’s a viable option. Children will be able to access marijuana, just as they access cigarettes, if this law is passed.”

“I would opt out,” Ryder said.

The effort to legalize weed is also seeing opposition from doctors.

“There is not enough long-term evidence to demonstrate this is something that is safe and won’t harm our communities,” said Sarah Ravenhall, executive director of the state Association of County Health Officials, according to Newsday. “There is a lot of short-term evidence and journal articles that suggest we should be concerned.”

“Physicians,” the Medical Society of the State of New York stated, “are very concerned that marijuana is an addictive drug that can have significant adverse public health impacts if it were to be legalized for nonmedicinal purposes.”

Clinical psychologist Jonathan Stea told The Epoch Times that in his 10 years of treating patients with a marijuana use disorder, he has seen “a substantial minority of people that are addicted to cannabis.”

Although cannabis addiction doesn’t have such severe symptoms as heroin, fentanyl, or cocaine, he said, it can nevertheless be very disruptive.

He also said pot addiction can be downplayed or overlooked in society.

He said some of the addictive symptoms pot users can experience include cravings, a sense of loss of control, compulsive use, negative consequences, habitual behaviors, and functional impairment.