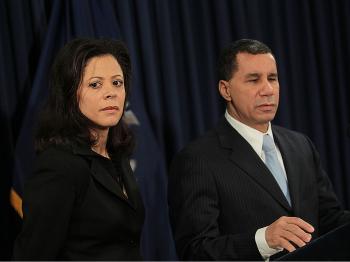 New York governor David Paterson (R) stands with his wife Michelle Paige Paterson (L) as he announces that he will not run, February 26, 2010. (Chris Hondros/Getty Images)
US

Following Gov. David Paterson's recent scandal, the two lawmakers say the bill will create an independent panel with the ability to subpoena the governor.

The two lawmakers say the bill isn't going after Paterson. The past several governors have allegedly abused their power, said Adams via a WNYC report.

Paterson said that he has not used the state police to do his personal bidding. He has given the case to Attorney General Andrew Cuomo for investigation.