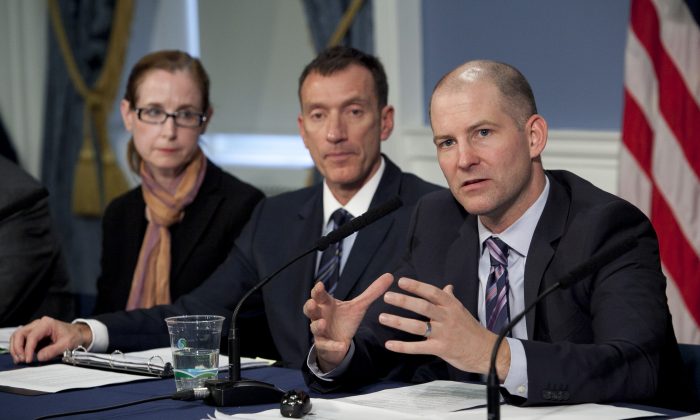 NEW YORK—It has been almost a year since Superstorm Sandy hit New York City, leaving in its wake devastation and heartbreak. The city has spent the past year not only cleaning up and rebuilding, but also planning on how to respond to any emergency situation like the one Sandy provided in October 2012.

On Tuesday, key players in the Bloomberg administration responsible for the recovery gave a briefing to reporters showing the progress made so far.

Despite being given nearly a week to prepare for the storm, the city did not have enough equipment for the type of disaster the storm brought. After a review, the city invested in 14 safety boats, 200 light towers, 70 mobile fuel trucks, 35 generators, and set up emergency contracts for food so those staying in shelters longer than just a night could eat more than military ready-to-eat meals (MRE).

Zoning maps were changed, and the 1.4 million residents in the city’s low-lying areas were given instructions on how to handle the next storm.

Hospitals are better prepared for evacuations and are on their way to making their infrastructure more resilient.

“We are prepared. In fact, we are better prepared than we were for Sandy,” said Deputy Mayor Cas Holloway from City Hall on Tuesday. “While you can never have every single thing covered, a lot of these recommendations have been put in place and a lot of new resources have been purchased and are ready to be allocated if we needed them.”

The city was able to swiftly change preparation measures for another disaster, should one strike again, but federal response for rebuilding has been anything but quick. Many of the battered homes resting on the shores on Staten Island and Southern Brooklyn remain in much the same state they were after the storm—waiting on federal funding to go forward.

To date, the city has received $1.77 billion in federal monies, although only one homeowner, Patricia Dresch of Staten Island, has received any of it. Roughly 24,000 people have applied for the city’s Build it Back program, but only first priority cases will receive funding this time around.

For the families waiting to get back in their homes, it has been a frustrating process.

“I think I would say to those families, ‘We are sorry it is not finished yet, but please be patient,’” Holloway said.

Not much progress has been made on permanently hardening the city against the next big storm. Of the 257 plans Mayor Michael Bloomberg laid out, 59 of them were to be completed by the year’s end. To date, 20 of them have been completed, such as getting City Council to pass laws that will help in long-term planning and adding sand on Coney Island and Staten Island.

Officials expect to complete another 43 percent before the year ends.

Much of the heavy lifting of Sandy recovery will fall on the next administration—either Democrat Bill de Blasio, or Republican Joe Lhota. The commissioners who have been in charge of the recovery since Sandy made landfall are not expected to return, but Holloway said every department is ensuring Sandy recovery is included in the transition documents for whoever replaces them.

“Our goal is to hand a well functioning machine to our successor who can then decide if they want to have it run the same way or make a change.”