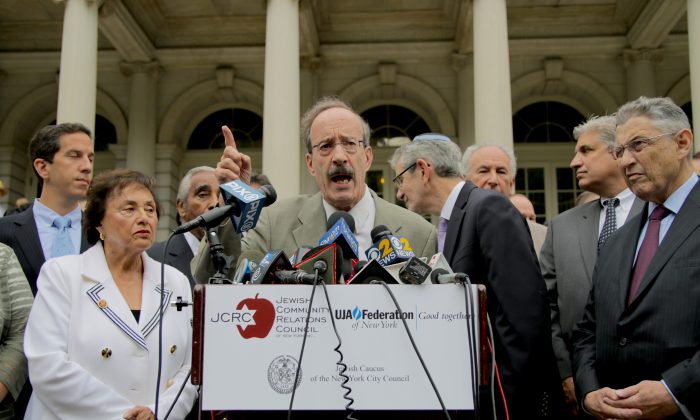 NEW YORK—Elected Democrats gathered in a rally outside of New York City Hall Monday in solidarity with Israel, speaking one after another in support of its recent military strikes in Gaza.

“We are here, united in our support of Israelis who are once again fighting for their survival,” declared New York Congresswoman Carolyn Maloney. “Hamas is a terrorist organization and they are living up to that description. Israel and many Israelis are living in terror. It is literally a reign of terror.”

The violence then escalated, with Hamas firing rockets into Israel and Israel firing back. A cease-fire brokered by Egypt and accepted by Israel was rejected by Hamas Tuesday.

“No people can tolerate being used for target practice. Israel had to act,” Maloney said. “The death toll doesn’t begin to tell the real story. This started with the kidnapping and murder of three children.”

Hamas was roundly blamed by the officials as the party responsible for the conflict and the subsequent casualties, and condemned as a terrorist organization.

“Hamas restarted the campaign to kill civilians, as many civilians as they manage to kill,” said New York Congressman Jerrold Nadler.

Congressman Eliot Engel, a ranking member of the House Committee on Foreign Affairs, drew parallels between Hamas and the 9/11 terrorists.

“Not so long ago, just a few blocks away on September 11th, 2001, terrorism reared its ugly head in New York City and Hamas is a terrorist group. Hamas is in sympathy with the people who knocked down the World Trade Center,” said Engel. “Israel shares our values. Israel is the only democracy in the Middle East.”