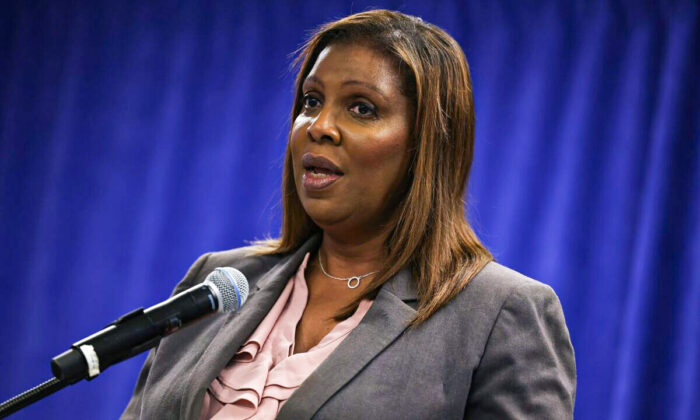 New York Attorney General Letitia James and Democrat lawmakers on May 9 announced new legislation that would provide financial support for groups that help women get abortions.

The legislation establishes a $50 million fund called the Reproductive Freedom and Equity Program, overseen by the state Department of Health, James, a Democrat, said during a press conference.

The money “will not go to individuals, but actually to abortion providers and nonprofit organizations aimed at facilitating access to abortion care,” she said. “The funding would specifically go to increase access to care because abortion is health care and will also fund uncompensated care and to address the support needs of individuals accessing abortion care.”

The bill was announced in part in response to the leak of a Supreme Court draft opinion that indicates a majority of justices plan to overturn Roe v. Wade, a 1973 ruling that declared access to abortion a constitutional right.

Among the classes of organizations that could get funding through the fund if the bill passes is any group that helps people from outside New York travel to the state to get an abortion.

“One of our greatest fears in generations is coming true: The Supreme Court will overrule Roe v. Wade,” Assemblywoman Jessica González-Rojas, a Democrat and one of the bill’s sponsors, said. “Millions who live in states hostile to abortion access will look to other states for that care. New York must be a leader at this moment and prepare for the impending need.”

State Sen. Liz Krueger, a Democrat who supports the legislation, said that New York must make sure New Yorkers can have abortions and be prepared to help “refugees from other states who are being denied their basic rights.”

Democrats hold supermajorities in each of the two state legislative chambers. They also hold the governor’s mansion. That means it’s likely the bill will be approved, though some Democrats may oppose it.

Planned Parenthood and the American College of Obstetricians and Gynecologists were among the groups that spoke in support of the bill.

Almost 9 percent of the abortions performed in New York in 2019 were performed on women from other states. That amounted to nearly 7,000 abortions.

Nationwide, about 630,000 abortions were performed that year, according to the Centers for Disease Control and Prevention.

If Roe v. Wade is indeed overturned, about half of U.S. states are expected to ban or sharply curtail abortion.

According to the pro-abortion Guttmacher Institute, approximately 40 million women live in states where abortion has already been or could be restricted.

Rojas said that hundreds of thousands of people will go to New York for abortions if the Supreme Court follows through on the draft decision.