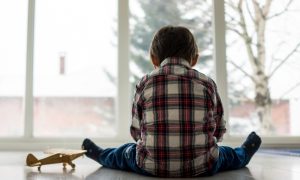 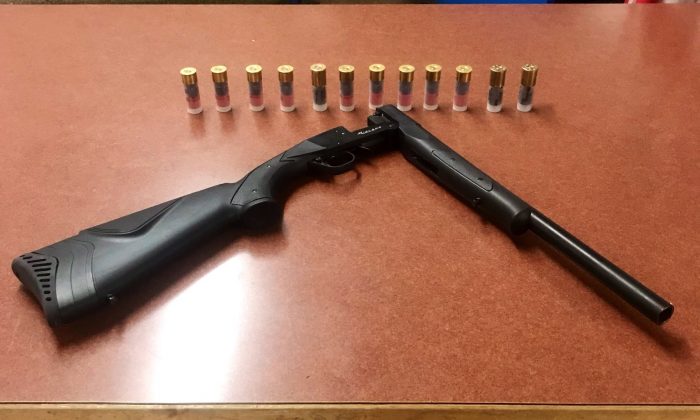 The shotgun that New York City police officers grabbed away from a suicidal teen who had it pressed against his chin on June 17, 2019. (New York Police Department)
Crime and Incidents

Two New York City police officers saved the life of a suicidal teenager by snatching a loaded shotgun away from the 19-year-old a split second before it fired.

The unidentified young man’s mother alerted the police that her son was in the stairwell of a Manhattan building on Monday, June 17, the New York Daily News reported, and that he was armed with a shotgun.

Officers responded to the Nagel Ave. residence, where they found the young man wielding the weapon. The policemen plucked the loaded shotgun from the teenager’s grasp as he held it up against his chin. According to the report, a split second after the officers snatched it away, the firearm discharged.

NYPD Chief of Department Terence Monahan later shared a photo of the shotgun and shells.

“This is the loaded shotgun that heroic cops grabbed away from a distraught individual who had it pressed against his chin. @NYPD34Pct officers knew the danger, didn’t hesitate — and saved a life. Well done!,” he wrote in a Twitter post on Tuesday.

This is the loaded shotgun that heroic cops grabbed away from a distraught individual who had it pressed against his chin. @NYPD34Pct officers knew the danger, didn’t hesitate — and saved a life. Well done! pic.twitter.com/8y2XUBOjx9

The young man was charged with reckless endangerment and criminal weapon possession, the Daily News reported.

Police say he shot himself in the head around 3:45 p.m. on a Staten Island street near the 121st Precinct to which the officer was assigned. His identity had not been released as of late Friday.

Last week, two longtime officers died in suspected suicides within 24 hours of each other. Deputy Chief Steven Silks was found dead in a police vehicle in Queens on June 5. Detective Joseph Calabrese was found the next day at a Brooklyn beach.

Police say both died from self-inflicted gunshot wounds to the head.

In the wake of the deaths, Commissioner James O’Neill sent a note reminding the more than 36,000 officers and 19,000 civilians in the NYPD that help is available if they’re feeling depressed, hopeless, or otherwise contemplating self-harm.

“This is about keeping our family healthy—and about saving lives,” O’Neill wrote. “Your jobs require that you spend so much of your work day helping people in crisis. But, before you can take care of others, it’s imperative that you first take care of yourselves.”

If you or someone you know is showing signs that they might be considering suicide, the National Suicide Prevention Lifeline is available 800-273-TALK or go to suicidepreventionlifeline.org. Texts can also be sent to The Crisis Text Line at 741741.

The best way to help a loved one who seems at risk of suicide is to help them seek out professional help.

According to the American Psychiatric Association, there are many psychiatric symptoms indicating a risk of suicide.

Below are five general indicators to be aware of, as reported by The Epoch Times’s Catherine Bolton:

This may not always come in a clear form. Visible cutting is usually an easy-to-spot sign of self-harm, but it’s not always done as a cry for help. For some, actions like cutting or other forms of physical self-abuse are done in an attempt to distract from mental anguish by replacing it with a manageable, more distracting form of physical pain.

Disclaimer: The above information about suicide prevention is for informational purposes only and is not a substitute for professional medical advice.

The Associated Press and Catherine Bolton contributed to this article.