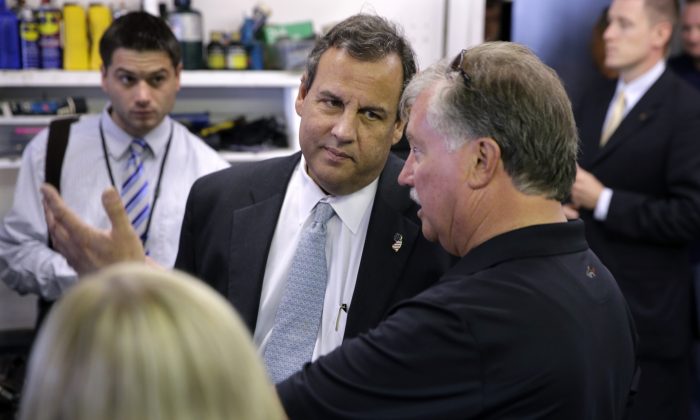 New Jersey Gov. Chris Christie (C) listens as Richard Weitzel describes repairs made to his East Dover Marina in Toms River, N.J., Wednesday, Oct. 29, 2014. Officials and residents in towns throughout coastal areas of New York and New Jersey are taking stock of the recovery from Superstorm Sandy on the second anniversary of the storm. The October 2012 storm devastated the oceanfront coastline and caused catastrophic flooding in New York and cities in New Jersey. (AP Photo/Mel Evans)
New York

BELMAR, N.J.—The second anniversary of Superstorm Sandy arrived Wednesday in a region where recovery in New Jersey and New York is happening unevenly, with many houses, boardwalks, and businesses rebuilt but many people still unable to return to their homes.

U.S. Housing and Urban Development Secretary Julian Castro and federal officials toured a flood-ravaged neighborhood near Raritan Bay in Union Beach where many residents are struggling to rebuild.

Andrea Kassimatis held her 6-month-old daughter as she described living with four other relatives in a 37-foot trailer next to a partially built home.
“It’s been a rough and grueling process,” she said. “You feel like your government has forgotten you.”

Kassimatis has received a $150,000 rebuilding grant from New Jersey but only got a third of what her flood insurance policy was supposed to pay—a common refrain up and down the coast.

“Don’t believe what you have from a flood insurance policy,” she warned. “Because what you’re sold is not what you’re going to get.”

She voiced her complaints to Castro, to New Jersey’s two U.S. senators, Robert Menendez and Cory Booker, and to Rep. Frank Pallone Jr., all of whom said more “accountability and transparency” is needed in Sandy aid distribution.

At an event in Perth Amboy, state Senate President Steve Sweeney said, “People still aren’t getting the answers they deserve.”

The Oct. 29, 2012, storm, which was spawned when Hurricane Sandy merged with two other weather systems, devastated the oceanfront coastline and caused catastrophic flooding in New York and cities in New Jersey, including Hoboken and Jersey City. It was blamed for at least 182 deaths and $65 billion in damage in the United States.

In New Jersey, the Fair Share Housing Center faulted the pace of aid distribution, saying only $220 million of the $1.1 billion the state has received for its main rebuilding grant program is in the hands of homeowners.

New Jersey Gov. Chris Christie, while defending his administration’s handling of the rebuilding, tangled with a heckler who was critical of those efforts. The often combative governor told heckler Jim Keady, who interrupted his speech several times to criticize the pace of storm aid assistance: “Sit down and shut up.”

“It seems like a lot longer than two years,” Christie said after the incident was over. “This has been a long, long two years and a long struggle. Time doesn’t move as quickly as we might like it to.”

Christie said his administration will keep working until everyone who needs help gets it.

New York Gov. Andrew Cuomo said his state has supported the repair and rebuilding of nearly 10,000 households, provided $20.8 million in grants to small businesses, and facilitated the proposal of approximately 600 projects through the New York Rising Community Reconstruction Program.