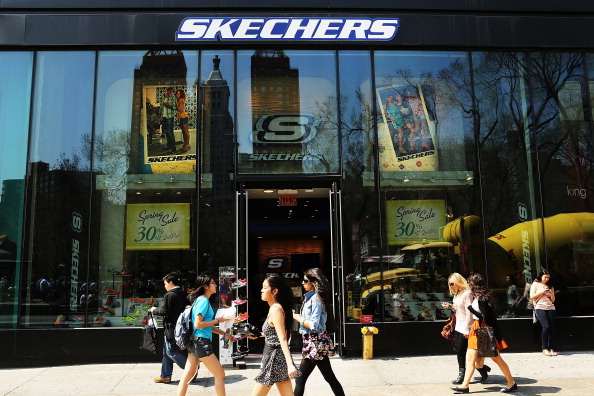 A New York mom is warning other parents about the dangers of light-up shoes after her 9-year-old son was left with foot injuries from wearing a pair in the water.

On June 26, Sherry Foster of Hinsdale, New York, posted images on Facebook of her son’s red, blistered feet after she says he got a second-degree chemical burn from his S-Light Skech Rayz Skecher tennis shoes.

“Apparently when they get wet the batteries release a chemical causing children’s feet to burn,” she said in her Facebook post, which had been shared over 536,000 times as of Sunday.

Foster told the Metro UK edition that her son was playing in water at school on June 24 and complained of pain in his feet later that day, but it wasn’t till the next day that it got serious enough for her to seek medical help.

She took him to a foot specialist who told them that she had seen one other case like that before, and prescribed him antibiotic cream and steroids.

“THANK You Dr Jordon for taking the time to see and treat him in your booked solid day! greatly appreciated!” Foster wrote in her Facebook post.

She also told Metro that Peyton wasn’t able to walk due to the pain, and that it would take about three weeks for him to fully recover. In the meantime, he’s developed another problem—a phobia of wearing shoes, she says.

Foster told Metro she is considering legal action, but for now, she’s just warning parents about the dangers of these light-up shoes.

“We have always bought Skechers and have never had a problem,” she told CafeMom. “His specific shoe, the Skech Rayz, had an on and off switch. If parents buy these, I recommend they do not get them wet or jump in puddles. I know kids love them because of the cool lights but be careful.”

Skechers told The Epoch Times in a statement:

“Skechers footwear products are rigorously tested for safety. Skechers, a family brand, has sold millions of pairs of children’s lighted footwear worldwide and has not had one incident of chemical burns reported. Notwithstanding, when Ms. Foster’s Facebook post was brought to our attention Friday, June 29, we immediately contacted her, inquired about her son, and asked her to send us the shoes so we can determine whether the shoes contributed to her son’s injuries.

“Ms. Foster has agreed to send us the shoes, and we will continue our investigation. Despite the lack of any other similar reported incidents, we are taking this complaint very seriously and giving it the highest priority.”

Foster told Metro that the company had offered to replace the $60 shoes, which she bought from a local store in April.

The Skechers website lists the Skech Rayz as out of stock or no longer available. The shoe has mostly good reivews on the Skechers website, and on Amazon, it has 3.9 out of five stars from 85 reviews. Most of the one-star reviews complain about the shoes falling apart or the lights not working a short time after purchase. None of them mention chemical burns as a result of wearing the shoes in water.