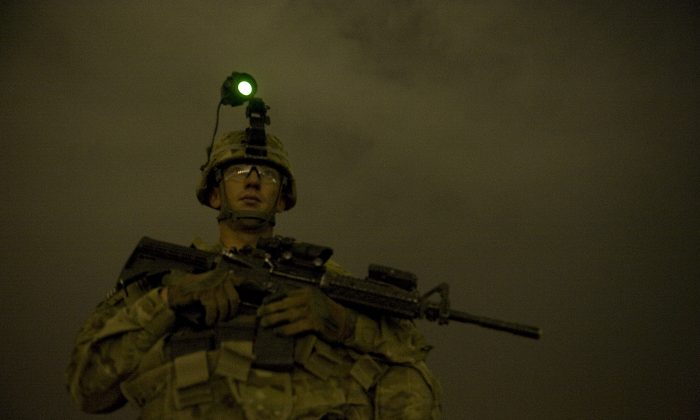 A sergeant of the US Army operating under NATO keeps vigil during a night-time operating post at Devils hill, Afghanistan on Sep. 6, 2012. Prosecutors allege the defendant sold counterfeit uniforms and gear to the U.S. military. (Photo credit should read TONY KARUMBA/AFP/GettyImages)
US-China Relations

Federal prosecutors have charged a New York-based wholesaler in relation to a conspiracy to manufacture and sell more than $20 million worth of Chinese counterfeit clothing and gear to the U.S. military, the U.S. Department of Justice (DOJ) said.

The DOJ alleges that 49-year-old wholesaler Ramin Kohanbash of Brooklyn, New York, along with several co-conspirators, sold knockoff goods, including protective clothing, to the U.S. military that appeared to be genuine American-made products, but were in fact manufactured in China.

Under U.S. law, goods sold to the military must be manufactured in the United States or certain other designated countries. China is not one of them.

U.S. prosecutors filed the criminal proceedings with a federal court located in Providence, Rhode Island on May 21, charging Kohanbash with conspiracy to commit wire fraud and trafficking in counterfeit goods.

Among the fake items allegedly sold by Kohanbash were 200 military parkas used by U.S. Air Force personnel stationed in Afghanistan, the DOJ said. The parkas were supposed to be made with a trademarked fabric designed to make the wearer more difficult to detect with night-vision goggles. According to the DOJ, the parkas sold by Kohanbash, however, did not have this capability.

Kohanbash had shipped about 1,100 of these parkas from China to his warehouse in New Jersey, court documents said.

Prosecutors said Kohanbash also sold counterfeit hoods meant for military and law enforcement personnel that were labeled as “permanently flame resistant” and to have met industry standards for fire-resistant attire. In reality, the hoods were not flame resistant, the DOJ said.

Kohanbash, the DOJ said, worked with co-conspirators to provide samples of real military uniforms and gear to manufacturers in China to copy.

China is the source of most of the world’s counterfeit goods. According to a 2017 report on intellectual property rights (IPR) seizure by the U.S. Customs and Border Protection (CBP), there were 34,143 IPR seizures in the United States in 2017, an increase of 8 percent from 2016. Of those seizures, 46 percent originated from China and 32 percent originated from Hong Kong, followed by Vietnam in third place with 19 percent.

If all the fake goods coming from China and Hong Kong were authentic, according to the report, it would have a retail price of about $940 million.

Buying counterfeits could indirectly lead to the funding of criminal enterprises and their illegal activities, according to the CBP. Its impact on U.S. economy is enormous, leading to loss of revenues for U.S. companies, and eventually loss of U.S. jobs over time.