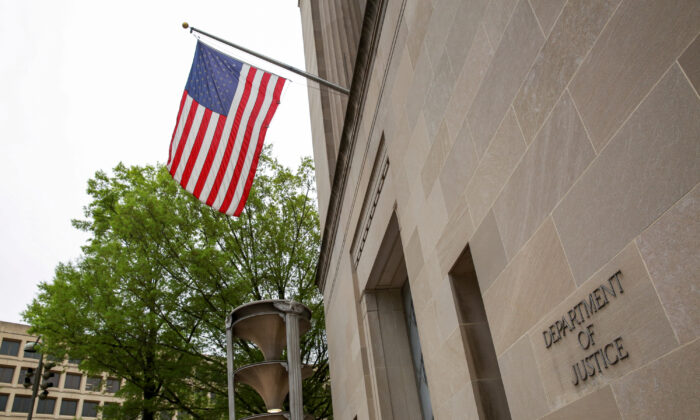 A general view of the Department of Justice building in Washington, on April 18, 2019. (Amr Alfiky/Reuters)
Crime and Incidents

A New York man was been arrested and faces federal arson charges for attempting to set fire to a Jewish school and synagogue in Brooklyn, the Justice Department said.

The man, Ali Alaheri, 29, from Brooklyn is accused of piling garbage bags against the side of a yeshiva, or a Jewish school, and synagogue on 36th Street in Brooklyn, and setting the trash on fire in the early hours of May 19, according to a criminal complaint (pdf).

Alaheri was captured on surveillance footage allegedly committing the act, as well as punching a man wearing traditional Hasidic garb several hours later without provocation. Federal prosecutors said Alaheri and the victim had no prior interactions before the alleged assault.

The task force officer responsible for Alaheri’s investigation said he identified the 29-year-old from photographs available in the New York Police Department database. Alaheri was arrested allegedly wearing the same clothing as was seen on the suspect in the video footage of the assault.

The criminal complaint also alleges that Alaheri was in possession of a stolen bicycle during the course of the incident.

“As alleged in the complaint and detention letter, Alaheri deliberately set fire to the sacred home of a yeshiva and synagogue, and viciously attacked a man wearing traditional Hasidic garb, demonstrating a violent hatred that cannot be tolerated,” Acting U.S. Attorney Mark J. Lesko said in a statement. “This Office strongly condemns these sorts of intentional acts of violence and we will go to every length possible to prosecute this type of conduct to the fullest extent possible.”

“The defendant’s alleged actions endangered the lives of numerous individuals, from the congregants and students at the synagogue and yeshiva, to the first responders who arrived to extinguish the flames, to the neighboring members of the community,” Bureau of Alcohol, Tobacco, Firearms, and Explosives Special Agent-in-Charge John DeVito said in the statement.

If convicted, Alaheri could face up to 20 years in prison.

The arrest comes after a series of anti-Semitic attacks on Jewish individuals this week. One of the incidents occurred in New York City’s Times Square, where a group of five or six men attacked a 29-year-old Jewish man during demonstrations over the conflict between Israel and the terrorist group Hamas, NYPD confirmed.

“The victim was approached by a group of five or six males who knocked him to the ground, assaulted him while making anti-Semitic statements,” police spokeswoman Sgt. Jessica McRorie told Reuters by phone. “They punched, kicked, pepper-sprayed, and hit him with some crutches during the assault.”

New York Gov. Andrew Cuomo has since condemned the attack, saying in a statement that New York “will not tolerate anti-Semitic violent gang harassment and intimidation.”

“New York is the vibrant and dynamic home for people from around the world. This tapestry makes New York the extraordinary place that it is,” said Cuomo, a Democrat. “Those of all faiths, backgrounds, and ethnicities must be able to walk the streets safely and free from harassment and violence.”

He has also directed the NYPD Hate Crimes Task Force to help with the investigation.

Similarly, on the other side of the country, officials in Los Angeles confirmed that the Los Angeles Police Department is investigating an alleged violent attack on Jewish people eating at a restaurant. Witnesses told ABC7 that a pro-Palestinian group yelled anti-Semitic remarks at the diners, and video footage showed men punching another man on the sidewalk.

Hamas and Israel agreed to a cease-fire to halt 11 days of deadly conflict.

Amid the clash, Hamas fired more than 4,000 rockets into Israeli civilian areas that are home to Israelis and Arabs, beginning on May 10. Israel responded with hundreds of targeted airstrikes and several ground strikes into Gaza to take down the offending and supporting Hamas infrastructure, which Israeli Defence Forces said were purposely placed next to civilian schools and other heavily populated areas.

Hamas said its rocket assault was in retaliation to weeks of tensions over a court case to evict several Palestinian families in East Jerusalem, and Israeli police responding to Palestinian rioters who Netanyahu’s office said planned the unrest near the city’s Al-Aqsa Mosque, Islam’s third holiest site, on May 10 during the Muslim holy month of Ramadan.