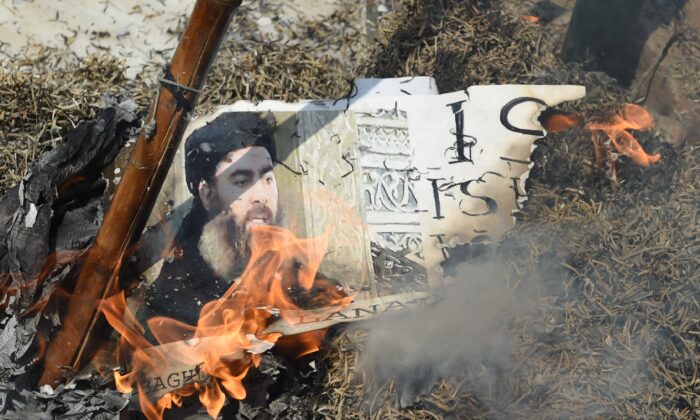 Demonstrators burn an effigy of the ISIS leader Abu Bakr al-Baghdadi during a protest in New Delhi on June 9, 2017. (Prakash Singh/AFP/Getty Images)
Crime and Incidents

A man from Brooklyn was arrested on Nov. 27 for attempting to assist the terrorist group ISIS with material support, including bomb-making instructions.

Zachary Clark pledged allegiance to ISIS to the now-deceased Abu Bakr al-Baghdadi in July 2019 and then later to Abu Ibrahim al-Sashemi al-Qurayshi in October 2019.

“As alleged, Zachary Clark twice pledged allegiance to ISIS, and posted on encrypted pro-ISIS chatrooms numerous exhortations and instructions on bomb-making and other terrorist acts to be carried out in New York.  Thanks to the Joint Terrorist Task Force, Clark now faces serious criminal charges for his alleged support of a terrorist organization bent on killing Americans,” U.S. Attorney Geoffrey S. Berman for the Southern District of New York stated.

Clark was caught by the Joint Terrorist Task Force in ISIS supporter chatrooms encouraging others to commit terrorist acts.

Clark shared plans for other ISIS supporters to carry out attacks in “well-populated locations” to inflict higher death rates.

“The defendant allegedly provided instructions for how to plan attacks on U.S. soil, encouraging ISIS supporters to attack in well-populated locations,” said Assistant Attorney General for National Security John Demers in the statement.

Clark is charged with one count of attempting to provide material support to ISIS, and another count for distributing information relating to explosives, destructive devices, and weapons of mass destruction. Both charges carry sentences of up to 20 years.

In a similar case, Samantha Marie Elhassani, 34, formerly from Elkhart, Indiana, pleaded guilty on Nov. 25 to one count of concealing terrorism financing.

She was charged in August 2018 with conspiracy to provide material to support the ISIS terrorist group.

“Elhassani admitted that she traveled overseas and pre-positioned over $30,000 in cash and gold, knowing that the funds would be used by her husband and brother-in-law to join and support ISIS in Syria,” Assistant Attorney General for National Security John C. Demers said in a statement. “The National Security Division is committed to identifying and holding accountable those who support foreign terrorist organizations.  I want to thank the agents, analysts, and prosecutors who are responsible for this result.”