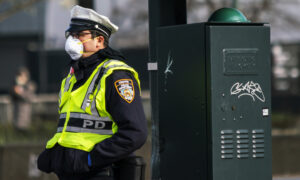 A criminal complaint was filed against the 31-year-old man from Brooklyn on Wednesday, and he has been charged with theft of mail after officers recovered nine Economic Impact Payments (EIP)—better known as stimulus checks—from Chen.

According to a statement released by the U.S. Attorney’s Office for the Eastern District of New York, the stolen stimulus checks totaled more than $12,000.

“For many families, these stimulus checks are a lifeline in these difficult times and anyone who tries to cut that lifeline will face the full weight of the law,” stated U.S. Attorney Richard P. Donoghue.

Chen made his initial appearance via videoconference Wednesday afternoon, the statement read. If convicted, he is facing a maximum of five years imprisonment.

“This Office will vigorously prosecute all those who seek to take advantage of the public health crisis,” Donoghue said.

Officers with the New York Police Department spotted Chen early on Tuesday, looking inside a medical collection bin at a closed medical office in Sunset Park, according to the statement.

Once Chen realized he was being watched by police, he quickly tossed the mail on the sidewalk. Officers exited their vehicle, apprehended Chen, and recovered nine EIP checks totaling more than $12,000, along with other stolen mail, including credit cards, multiple checks, and opened envelopes and letters, bearing the names and mail addresses of various individuals.

“The Economic Impact Payments are, in many cases, the lifeline needed by these individuals to stay afloat during this crisis. When Mr. Chen stole these checks, he robbed recipients of these much-needed funds. Postal Inspectors and their law enforcement partners have no tolerance for the theft of mail, especially during these unprecedented times.”

NYPD Commissioner Dermot F. Shea said the department recognizes all too well how the CCP (Chinese Communist Party) virus outbreak presents an opportunity for a variety of malicious, criminal scams.

“In this case, I applaud our alert detectives and federal partners for interrupting an alleged scheme to victimize New Yorkers by stealing important mail and stimulus money meant to aid them during this unprecedented crisis,” Shea said.