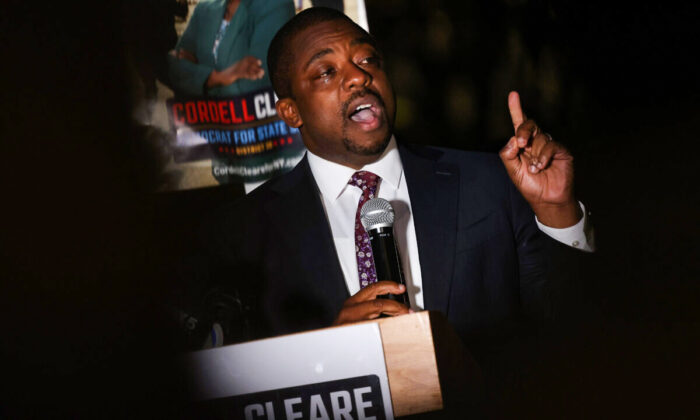 New York Lt. Gov. Brian Benjamin has been charged with allegedly participating in a scheme that saw the Democrat get campaign contributions in exchange for wielding his official authority to get money for a nonprofit.

Prosecutors say Benjamin became close with a real estate developer referred to as “CC-1” in court documents. The developer owned a real estate business based in Harlem, New York, and controlled a nonprofit working with public schools in the city.

The business owner provided financial support for events promoted by Benjamin or his Senate office and contributed to Benjamin’s political campaign, according to the indictment. Benjamin, in turn, attended events connected to the person and the nonprofit.

At one point, Benjamin funneled $50,000 that he was told to allocate by New York Senate leadership to the nonprofit.

About two weeks later, the person gave Benjamin a $10,000 cashier’s check, a $10,000 personal check, and a $5,000 check on behalf of a company the person controlled, according to prosecutors.

“Taxpayer money for campaign contributions. Quid pro quo. This for that. That’s bribery, plain and simple,” Damian Williams, U.S. attorney for the Southern District of New York, told reporters during a briefing.

In addition, Benjamin is accused of repeatedly lying to cover up the scheme, including by falsifying campaign forms and lying on documents he filled out before becoming lieutenant governor.

Benjamin was arrested on Tuesday morning and was scheduled to appear in court on Tuesday afternoon.

Benjamin “abused his authority as a New York State senator, engaging in a bribery scheme using public funds for his own corrupt purposes,” according to an indictment that was set to be unsealed on April 12.

Benjamin was a state senator until Sept. 9, 2021, when he was appointed by new New York Gov. Kathy Hochul.

Hochul’s office did not respond to a request for comment. Hochul told reporters in New York City that she would issue a statement later in the day. She said she had not spoken to Benjamin.

Williams declined to answer when asked whether his office had been in contact with the governor’s office.

Hochul and Benjamin are running for a full term in office on the same ticket.

“Kathy Hochul forced Brian Benjamin upon our state as Lieutenant Governor. He was such a bad pick. Running point on the defund the police movement in the legislature should have alone disqualified him. When this corruption surfaced, Hochul tripled down. She owns this…all of it! Terrible judgment!” Rep. Lee Zeldin (R-N.Y.), who is running in the gubernatorial election, said in a statement.

Nick Langworthy, chairman of the New York GOP, said Hochul’s choice of Benjamin as a running mate shows she “does not possess the judgment nor the moral code to serve as governor.”