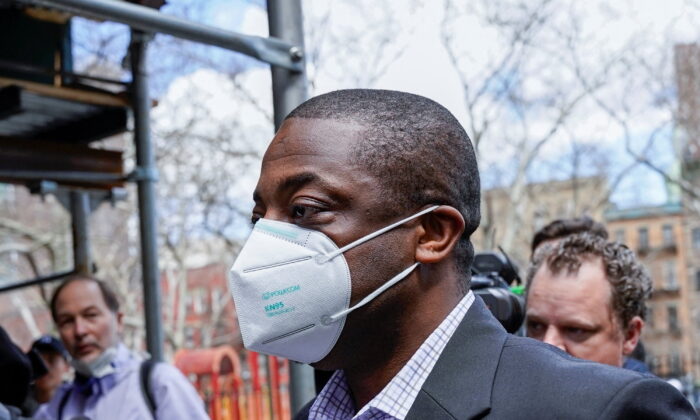 New York State Lt. Gov. Brian Benjamin, who has been arrested and charged with bribery and fraud for allegedly directing state funds to a group controlled by a real estate developer who was a campaign donor, leaves a courthouse in New York on April 12, 2022. (Dieu-Nalio Chery/Reuters)
New York

New York Lt. Gov. Brian Benjamin resigned on April 12 after being hit with bribery and fraud charges for allegedly directing state funds toward a real estate developer in exchange for campaign contributions.

Benjamin, 45, second in command to Gov. Kathy Hochul, resigned hours after federal prosecutors unsealed an indictment and arrested him on federal bribery charges.

Hochul said on April 12 that she had accepted his resignation and that he was stepping down immediately “while the legal process plays out.” She handpicked Benjamin for the lieutenant governor’s job in August 2021.

“It is clear to both of us that he cannot continue to serve as lieutenant governor,” she said in a statement. “New Yorkers deserve absolute confidence in their government, and I will continue working every day to deliver for them.”

Prosecutors said Benjamin in 2019 directed a $50,000 state grant to a nonprofit controlled by a developer from the Harlem section of Manhattan, which Benjamin represented at the time as a state senator. The developer then sent Benjamin’s reelection campaign thousands of dollars through several checks in the names of relatives and a limited liability company, according to the indictment.

“Taxpayer money for campaign contributions. Quid pro quo. This for that. That’s corruption,” said Damian Williams, the U.S. attorney in Manhattan. “Public corruption remains a problem in New York. It is a bipartisan problem. It is an ongoing problem.”

The Harlem real estate developer wasn’t identified by name in the indictment.

Benjamin faces charges that include bribery, wire fraud, and falsification of records. His case and Migdol’s are in the same case file.

U.S. Magistrate Judge Ona Wang released Benjamin on a $250,000 bond and imposed travel restrictions that leave him unable to travel to Albany, New York’s state capital, without permission from authorities.

FBI New York Assistant Director-in-Charge Michael J. Driscoll said, “Exploiting one’s official authority by allocating state funds as part of a bribe to procure donations to a political campaign and engaging in activity to cover up the bribe is illegal.”

Benjamin has a court appearance scheduled for April 19.