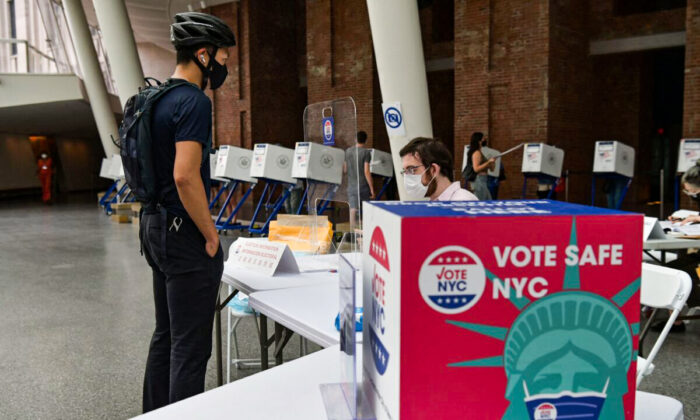 Passed by the city council in December 2021, the amendment to the city charter allows permanent residents and persons authorized to work in the United States to cast ballots in New York’s city elections.

The complaint, filed Feb. 2, also asks the court to permanently prohibit the New York City Board of Elections from registering foreign residents to vote and from counting votes cast by them.

The court was also asked to declare that the city’s foreign voting law was “adopted with an impermissible racial intent or with the purpose of denying or abridging” the plaintiffs’ rights.

The plaintiffs allege that their civil rights under the 15th Amendment of the U.S. Constitution have been “abridged” by the new city ordinance.

They claim it was adopted with the discriminatory purpose to alter the racial composition of the city’s electorate, with the goal of diminishing “the voting strength of black voters and other racial groups,” relative to Hispanics and Asians.

As evidence of racial intent, the complaint cites statements made by council members at a September hearing, in which amendment advocates spoke explicitly about race and how passage would increase the power of Hispanics and Asians.

The members’ remarks, some in Spanish, were recorded in the meeting minutes.

“Any election procedure enacted with any racial intent or purpose is unconstitutional…If race played any role at all in the enactment of an election procedure, the procedure violates the Fifteenth Amendment…,” contends Maureen Riordan of the Public Interest Legal Foundation, the plaintiffs’ attorney.

According to the complaint, New York City has five million active registered voters, but turnout was only 20 percent in the 2021 municipal election.

In the Democrat primary, the race for mayor was decided by 10,000 votes.

U.S. Census data referred to in the complaint shows there are 1.2 million foreign nationals residing in the counties of Bronx, Kings, New York, and Queens. These, along with Richmond, comprise the five boroughs of the City of New York.  Included in the total are 488,030 Hispanics and 343,018 Asians.

The city’s new voting amendment is estimated to have enfranchised 800,000 foreign residents.

Under the law, foreign voters now comprise 15 percent or more of the electorate, according to the complaint.

Plaintiffs also allege that the New York City Council ignored the city’s own charter when it passed the amendment without submitting it to a referendum by the voters as required by law.

The complaint claims a vote of the people is necessary because council’s action “changes the method of electing city officials by changing who is eligible to vote in those elections.”

Such departures from normal procedures have been held by the courts to be indirect evidence of racial intent.

Christian Adams, president of the Public Interest Legal Foundation, said of the case, “Sponsors of the foreigner voting bill were explicit that race motivated their legislation and not merely giving non-citizens the right to vote…We are confident the court will rule in our favor.”

No spokesperson for the New York City Board of Elections was available to comment.