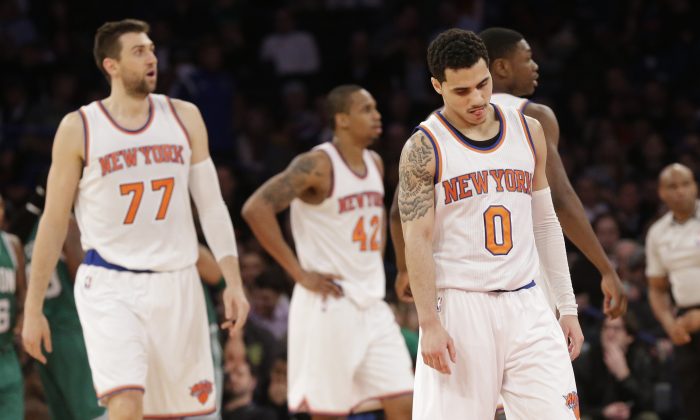 New York Knicks guard Shane Larkin reacts after a foul was called against the Knick during the second half of an NBA basketball game Boston Celtics, Friday, March 27, 2015, at Madison Square Garden in New York. The Celtics won 96-92. (AP Photo/Mary Altaffer)
NBA

The New York Knicks have become the worst team in the NBA following the All-Star break.

Unlike most teams, the Knicks have steadily gotten worse over the season. In the offseason, trading away Tyson Chandler made them worse. Then, Carmelo Anthony got hurt. He eventually shut it down for the rest of the season. New York also dealt away J.R. Smith and Iman Shumpert, and Pablo Prigioni. The team also cut Samuel Dalembert and Amare Stoudemire.

The Knicks, even if they win the rest of their games, will have the worst record in franchise history (founded in 1946).

In leaguewide persepective, the Knicks are averaging seven fewer points per game, for a -14.7 point differential. That means they’re losing games by an average of almost 15 points. Before the All-Star break in early February, the Knicks were the third-worst team in the league. They’re now the clear worst team, with the second-worst team being the Minnesota Timberwolves (-7.4 point differential).

Furthermore, the Timberwolves and the other worst teams in the league—such as the Philadelphia 76ers, Denver Nuggets, and Sacramento Kings—have all gotten better since the break. Only the Orlando Magic have gotten worse, and only by 0.7 points.

Sports Illustrated noted that the point differential is the worst since the NBA started keeping track in the 2000–2001 season, although the Knicks have won a few more games (4–17 so far) than the worst teams in the last 15 seasons, such as the 2001 Golden State Warriors, who went 2–32 after the break.

The good news is that the Knicks are setting themselves up for a very high draft pick, possibly the No. 1 pick overall. Duke’s Jahlil Okafor, Kentucky’s Karl Anthony-Towns, Ohio State’s D’Angelo Russell, and Emmanuel Mudiay, who played in China, are expected to be the top four picks. The first two are big men, and the latter two are point guards.

New York is also expected to be active in free agency. “We will rebuild a team that fits together-guys that want to compete and play the way the basketball gods approve,” team president Phil Jackson promised fans via Twitter this week.