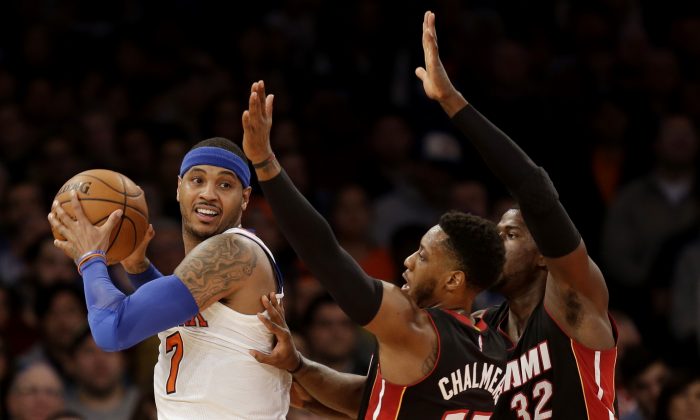 The New York Knicks’ season isn’t going well and the news and rumors are ramping up.

Anthony Not Going to Panic

Carmelo Anthony said that he’s not going to panic over the Knicks rough 4-14 start.

“That comes down to us as individuals whether we panic or not. Me being one of the leaders of this team, I’m not gonna panic, so none of my teammates are gonna panic,” Anthony told ESPN.

“Every day is a new day. And tomorrow we got another opportunity to try to turn this thing around.”

The Knicks have a good shot at a win on Tuesday against the Brooklyn Nets, who are also struggling at 6-9.

Anthony said that he’s trying not to let the negativity into the team’s locker room.

“It’s a challenging mindset,” Anthony said of not letting the team become accustomed to losing.

“I think anytime you’re losing basketball games, negativity, lack of confidence can start to seep in. But that’s something I don’t want to deal with, we shouldn’t have to deal with.”

JR Smith played only six minutes on Sunday then sat out the rest of the game with an illness.

Smith went to see the medical staff at practice on Monday, but was sent home with flu-like symptoms.

The New York Daily News noted that Fisher’s yanking Smith out of the Heat game was a “head scratcher.”

“Fisher would later say that Smith was removed because the enigmatic shooting guard was feeling ill, even though Smith wasn’t sick enough to leave the bench for treatment. So we’ll take Fisher at his word unless Smith says otherwise, which is unlikely since the Knicks go to great lengths to paint a picture of being a unified group even as everything around them is falling apart,” it said.

“FYI: Smith left the locker room without speaking with reporters, which was probably good for both Fisher and Smith. Who knows, may J.R. was rushing home for chicken soup.”

It added: “You don’t know when or if they’ll figure out the triangle or whether Fisher will ever settle on a set rotation. Better yet, no one knows when they’ll win again.”