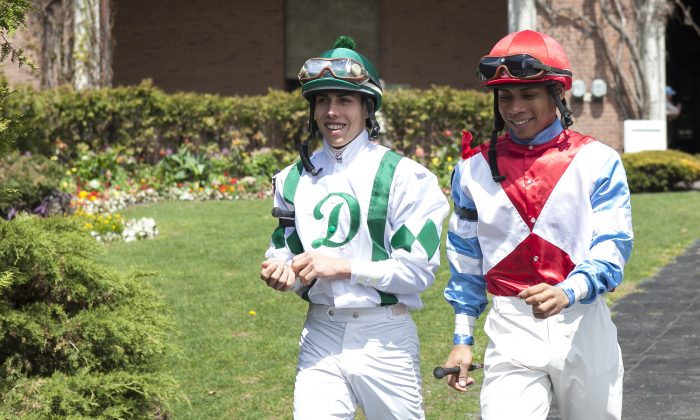 They knew from a young age what they wanted, and racing at the Kentucky Derby is just another race day to love
By Genevieve Belmaker

NEW YORK—Horse jockeys Jose and Irad Ortiz might be young, but they’re at the top of their game. The New York-based brothers, 20 and 21, hail from Puerto Rico and have been on the professional racing circuit in New York for just a few years. But on Saturday, they will ride in the most important race in America—the 140th Kentucky Derby.

Despite the tremendous pressure of the high-profile race and its hefty $2 million winner’s purse, on Thursday at Belmont Park racetrack, it was business as usual.

Speaking from the racetrack’s jockey lounge, a relaxed Jose said he is ready to ride New York born and bred Samraat in the derby. On Thursday, he won the first race of the day with Mei Ling, easily defeating his brother’s and five other horses.

When it comes to Samraat, Jose is confident in the skills of the 3-year-old who he has worked with since the horse was a foal.

“I’ve been working with him since he was a baby,” said Jose. “He was nervous and a little bit crazy, but now he’s more relaxed and he’s a very nice horse to ride.”

Samraat, who is ranked fifth for the season, recently placed first at the high-stakes Gotham and Withers and is owned by Leonard Riggio, the chairman of Barnes & Noble, Inc., the largest bookseller in the world.

As far as Samraat goes, Jose said he feels calm when he’s riding him, even though he has suffered injuries in the past. In April 2012 it took a month for Jose to recover from multiple injuries after a fall.

“It’s hard because you could get hurt in any moment,” he said.

But the risk doesn’t stop him. In addition to Samraat, a typical week for Jose includes racing up to eight horses a day for five days. No matter which horse he’s riding, Jose is well aware that it is the their race.

“You ride good horses, you win,” he said.

If Jose and his elder brother are any indication, the jockey also knows. Both of them decided as little boys that they wanted to ride professionally, a nod to their grandfather and uncle, who were both jockeys.

For Irad, it was love at first sight before he’d even turned the tender age of 5.

“I just love horses—when I went to the racetrack for the first time and I saw the horses, I fell in love.”

The Ortiz brothers were constantly around horses growing up, and both took two years of special jockey schooling before starting their careers in Puerto Rico. The lure of the larger purses drew them to the United States, where their grandfather lives.

Irad, 21, moved to the United States first and rode in the New York circuit for about a year before Jose joined him.

The brothers both readily admit to being very competitive with each other, but respect the fact that they have a job to do—even when they’re riding side by side in the heat of a race.

“You lose everything around you when the bell goes off,” said Irad, who is roommates with his brother. The job comes first. “We love to ride.”

Irad will ride horse Uncle Sigh for the first time in Saturday’s Derby. Though he has met the horse, he’s never ridden him—even in one practice run.

Despite that, Irad said he thinks Uncle Sigh will be “very easy to ride.” As for jitters about mounting a saddle on the horse’s back the day of such an important race, he is not nervous. Not yet.

“I just try to tell myself, it’s a big race, there will be a lot of people, but it’s just another race,” he said. He is still counting on establishing a good rapport, though.

Irad’s approach to smooth things over with Uncle Sigh will be typical for him: calm and gentle and with a certain amount of deference to the sensitive nature of the animal.

Like his brother, win or lose, Irad sees his work as part of a continuum and an art that demands constant improvement. Part of that is listening to advice from other jockeys with more experience. Yet at the end of the day, he believes the horse is what makes a jockey good, not the other way around.

“If you win by a nose or a neck, maybe you made the difference,” said Irad. “But when you win by four or five lengths, that’s the horse.”

Jose and Irad’s parents and grandfather will be at the Derby Saturday to cheer them on. But both brothers insist if one of them is victorious, it won’t be cause for a huge celebration.

“We’ll just go out to have dinner,” said Irad. “I have to work the next day.”