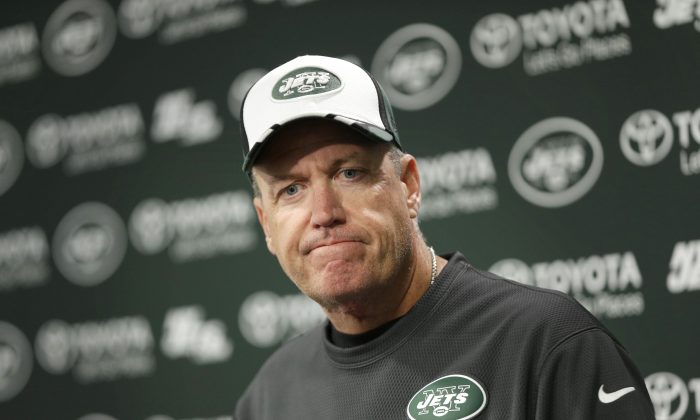 After suffering a close loss to the Miami Dolphins last week, the New York Jets will play the Minnesota Vikings in an away game. Here’s some of the latest rumors and updates:

Coach Rex Ryan said Friday that the Jets’ locker room situation isn’t “toxic.” He was responding to a report from SB Nation that made those claims.

In the report, it claimed Ryan was trying to fire offensive coordinator Marty Mornhinweg.

“I give no credibility to that story,” Ryan said on Friday, according to NFL.com. “I thought there were some other things in that story, the same one, that I thought were hilarious. The one about, I’ve already told you guys how I thought about how I was trying to stick it to John (Idzik), about that’s why we never threw the ball.

“And then as it turns out, Marty was trying to stick it to me. This is like, ‘What?’ They’re going all over the place, and none of them make sense. We’re trying to win a game. And that’s as simple as it is.”

Ryan said that the story originates from an outside reporter who doesn’t know the team.

“Rex and I are close. Everything we do is about getting better and figuring out a way to win football games,” he said.

Another report–this time from the Metro–is saying that an unnamed veteran Jets player said the move to start quarterback Geno Smith over Michael Vick this week means the team’s management have “packed it in, waived the white flag, whatever you want to call it.”

“I don’t think any of us have quit in this [locker] room. But it seems like those above us, they’ve quit on this season. You can’t do that. Players need to make a living, get stuff on tape, play for that next year,” the person said in the Metro.us report.

“But it seems like that isn’t important, that winning this year isn’t a big deal to them anymore. Like they’re already looking at 2015 and beyond. Maybe they felt that way earlier this year and stuff but I don’t know.”

Rex Ryan has previously said that he feels “embarrassed” by the team’s poor record.

The same player said that Ryan “still has our hearts in his hands man … He still gets us fired up, he gets it. You can tell that he’s doing his best to put us in the best spot to win, but it feels like he’s fighting that battle alone.”

“You see him here, late night. I heard he’s here until the early morning hours. Sometimes you’re here at this facility early for whatever and you see him in the hallway like ‘The Walking Dead’ or something. He’s still putting his all into this team. I don’t think anyone in here is going to quit on him or the fans. We’re going to fight and do things the right way here as much as we can to the bitter end, no matter what the world says.”

Jets defensive end Sheldon Richardson said that he is standing by his comments on the situation in Ferguson, Missouri. He said that police officer Darren Wilson “is a pig” for shooting Michael Brown. After a Missouri grand jury decided not to indict Wilson, violent protests ensued in the city last week.

Richardson was born and raised in St. Louis, which is near Ferguson.

“Destroying Ferguson was not what I wanted to come from the verdict of the grand jury,” Richardson said Thursday, via AP. “I actually wanted my whole city to stay intact and I don’t think we’ll bounce back from that. Well, the area of Ferguson, anyway. That’s just how I feel about it. I just want my hometown to stay as peaceful as possible, but I don’t blame them.

“I know where they’re coming from and I understand,” he said. “But that’s not the solution.”

Jets GM John Idzik is again under fire from fans who want to see him gone.

Those who operate FireJohnIdzik.com said that fans can purchase “penalty flag” towels to support his ouster. The site is selling the towels for about $10 a piece.

The site says that fans should waive the towels during the final Jets’ home game, which is against the New England Patriots on Dec. 21.

The site says: “Our voices have been heard but we will continue to hammer the point home until this entire front office is washed out.”