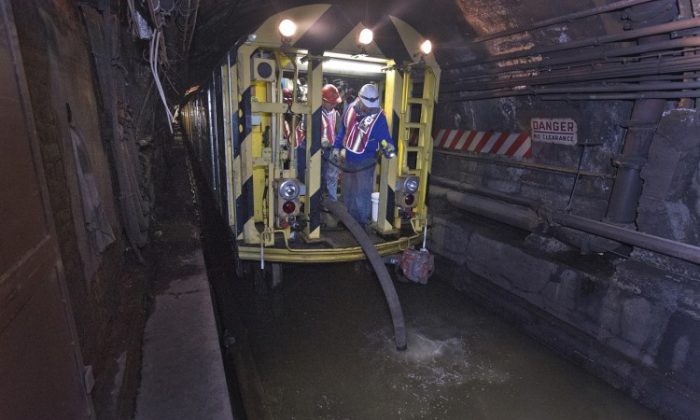 MTA employees use a pump train to pump seawater out of the L train tunnel under the East River after Hurricane Sandy. (Metropolitan Transportation Authority / Patrick Cashin)
New York

One of the most popular subway lines in New York City—and the main conduit from Manhattan to wide swaths of Brooklyn—could be shut down for as long as three years.

But the L train’s Canarsie Tube was flooded with saltwater during Hurricane Sandy several years ago, which caused a lot of damage. The tube was partially repaired after the hurricane but it needs a lot more work.

The project is estimated to take three years, and the Metropolitan Transportation Authority, which manages the subway system, is considering shutting down service between Manhattan and Brooklyn entirely, sources told Gothamist. In that scenario, L-service would terminate at Bedford Avenue, the final stop in Brooklyn before the train goes underwater to reach Manhattan.

Another option being weighed would keep one of the two tunnels in the tube open while workers repair the other. But there are drawbacks to that scenario the agency must keep in mind.

“If one tunnel is down, how bad will the L train be in the mornings just going one way?” one source said. “It’ll be packed beyond belief. It’ll be a fight. Is that the smartest way to do it if it’s going to be the difference of a year? I don’t know.”

Some experts say the first option is likely the best.

“You’re going to have to take some lumps, people are going to be inconvenienced—get it done as quickly as possible, then reopen with a new system,” said Dr. Robert Paaswell, an engineering professor at City College of New York and Director Emeritus of the University Transportation Research Center.

“I hate to be hard about it—that’s why I’m not the head of the MTA, because I don’t have to make that decision—but if I were, I would get it done as quickly as possible.”

But the first scenario could get the work done much faster than three years, with a comparison drawn to another tunnel that was fixed in 13 months after it was completely closed.

“The work has to get done. There is no way around it. Unfortunately, the L is unique in that there is such heavy ridership in an area that has so little redundancy from other subway lines,” MTA spokesman Adam Lisberg told the New York Times.

“We are obviously looking for ways to minimize the duration of the work and the inconvenience, and we do not want work that would drag on for years.”

In either scenario, people who usually ride the L train would see increased service on the M and G lines, and a fleet of shuttle buses.

Work on the tube is expected to begin in late 2017.