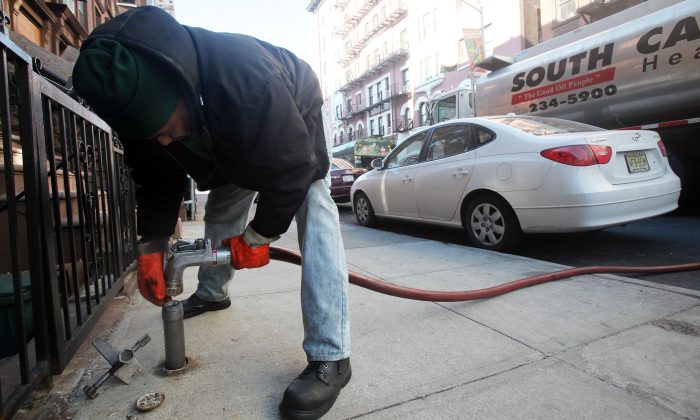 U.S. East Coast heating oil supply increased recently to 59 million barrels, higher than any time in the previous three years, said the U.S. Energy Information Administration (EIA) in a recent report. This means the winter outlook for the Northeast, which has the largest concentration of homeowners that rely on heating oil in the country, is looking good and the environment will be cleaner to boot.

Production at refineries in the Philadelphia and New York hubs have been high, combined with profitable pricing, which has allowed for more shipments from the Gulf Coast to the New York harbor storage facility.

The shipments contain cleaner oil with much less sulfur than previous years, as a result of New York’s leading efforts to meet new environmental regulations.

Since 2011, heating oil inventory, a type of distillate fuel oil, had been relatively low, compared to the previous five-year average, reflecting a long-term decline in demand as homeowners converted to natural gas and as fewer new homes were built to use heating oil.

Despite the overall decline in heating oil users nationally—the number dropped from 8.7 million homes in 2006–2007 to 6.9 million homes in 2014—about 80 percent of those households are in the Northeast, where people still rely on heating oil for space heating or water heating, rather than using gasoline or some alternative source of energy.

Heating oil, which is processed from crude, is not typically considered a clean energy source. Traditionally, it has contained upward of 2,000 to 3,000 ppm (parts per million) of sulfur, which emits sulfur dioxide when burned—a major pollutant under the Clean Air Act.

In April 2014, Congress authorized the substitution of ultra low sulfur diesel fuel (ULSD), which has only 15 ppm of sulfur and is typically used for transportation, in place of high sulfur heating oil.

The high-sulfur heating oil, or No. 2 oil, had supplied New York homes since 1978 under an energy futures contract, according to a report by Platts, a leading energy news provider.

In a bold move, in 2011 New York pushed aside the long-standing No. 2 heating oil NYMEX contract for a new, never traded ULSD contract at a time when all Northeast states were looking to adopt a regionally consistent low sulfur standard to reduce air pollution from this source. It started using the USLD for the first time in 2013.

Today the New York Harbor area, which supplies fuel to the Northeast, has its largest inventory of ULSD ever since the switch was made.

Five states (New Jersey, Massachusetts, Connecticut, Vermont, and Rhode Island) followed New York’s lead in 2014, reducing their sulfur content from a high of between 2,000 and 3,000 ppm down to 500 ppm, an interim drop that will be reduced again to ULSD by 2018.