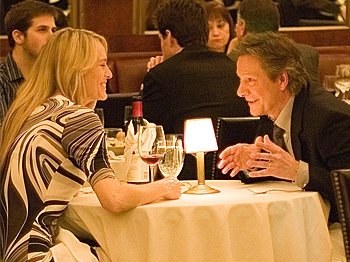 ‘New York, I Love You’: Collaboration of Emerging Writers and Directors

By Masha Savitz
Print
New York, I Love You is a kaleidoscope of characters, images, and music that create colorful impressions—moments woven in a film-tapestry.

What is so unique about New York, I Love You is the use of multiple directors, writers, and actors. This diversity creates a real sense of the Big Apple’s complexity and texture. With the artistry of Balsmeyer, however, the film never loses its continuity. Randy Balsmeyer, director of transitions, masterfully entwines the centipede-like nature of the structure into a well-crafted film.

“I didn’t want to go to the usual New York suspects; to Spike Lee, or Woody Allen, or Martin Scorsese,” says producer, Emmanuel Benbihy in the press notes. “I consciously went to younger, newer directors from all around the world— directors who are edgy in their approach—who are pushing cinematic borders, who might be able to see New York not as it used to be but how it really is today, right now.”

Those contributing to the ambitious collaboration had to follow certain rules. For the screenplay, the rules required each story to be visually identified with one or more New York neighborhoods, and each story had to revolve around some kind of broadly defined love encounter.

From an illusory encounter in an eastside hotel, an elderly couple in Coney Island, new lovers reluctantly reuniting in the village, or an artist and his star-crossed muse from Chinatown; we become voyeurs, like passengers on a subway, witnessing the fantasies that are played out with surprising outcomes and the sometimes quirky, tender, and ultimately endearingly human connections happening constantly in the electric city.

Benbihy explained the necessity to be flexible and focused during the logistical challenges of this well orchestrated and complicated production.

The rules for the production and post-production stage were that the director and crew could only shoot for two days. The segment was edited for seven days with a chosen editor, as a new director and cast shot their piece. There would be no fades to black at the end or beginning of any segment.

Also, the production designer, costume designer, and all below-line crew were consistent throughout the eight-week shoot.

“It remains an ambitious concept for which there is no real precedent and one that is still full of hurdles and challenges,” acknowledges Benbihy, “but it’s something that was very exciting to the filmmakers we approached and is becoming a reality.”

Elements of sheer beauty are especially notable in Shekhar Kapur’s haunting piece, starring a luminous Julie Christy. Natalie Portman is starring in one of the vignettes, and also brilliantly writes and directs a segment with fresh vision and candid charm.

New York, I Love You is the second in a series of films Benbihy calls; “Cities of Love” that started with his home, Paris, when he produced the well received Paris Je T’aime.

“My idea was always to make a collection of movies that would illustrate the universal idea of love around the world,” says Benbihy.

Next cities in development are Rio and Shanghai in 2010, and the following year, Jerusalem and Mumbai.