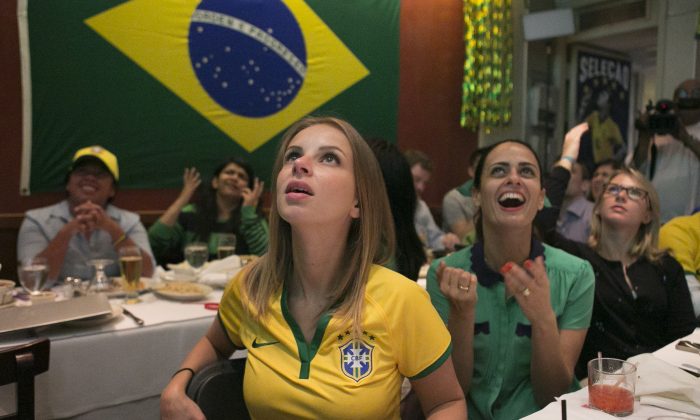 In Manhattan’s Little Brazil, people of many nationalities were out in droves to watch the first game in a series of matches between 32 countries that will run through July 13.

On Thursday, fans ran through the busy streets and camped out on the sidewalks to watch outdoor screens in celebration of World Cup’s start. Most of all they packed into a pocket of Brazilian bars and restaurants on 46th Street that were showing the game live on big-screen TVs.

“When there’s a World Cup, we watch here,” said Jason Machado, who was with his father Fabio at Via Brasil. During halftime, the two men stood outside the packed restaurant to get fresh air. “There’s no better place to watch than Little Brazil.”

His father Fabio, who emigrated from Brazil 40 years ago, is a successful restaurant owner of multiple restaurants throughout the city. But his business was on 46th Street, within view of Via Brasil. Four decades later, he reveled in watching his home country play in the most widely watched sporting event in the world with his grown son.

The Machado men aren’t fairweather soccer fans who only come out when it’s a big game. It’s part of who they are.

“We come constantly to watch games here,” said Jason, who added that his favorite aspect is the buildup to extreme moments of action. “There’s no energy in sports like there is in soccer.”

Across the street at Emporium Brasil, the jam-packed restaurant was full of people of every age from babies to older gentlemen. Between brief intermissions of intense drama and cheering over goals and fouls, the crowd dined on fried plantains, massive plates of grilled steak, and beer. They were focused and fairly reserved until Brazil scored its first goal of the night. Everyone was instantly on their feet, hands in the air, making a deafening, victorious roar.

For those who didn’t plan ahead to make reservations for the Brazilian restaurants and bars hosting the game, the sidewalk provided a cramped, awkward alternative.

Zachary Rubin, co-founder and director of soccer merchandise store Upper 90, provided an alternative with his roving large-screen TV. Attached to the side of a branded van, Rubin parked directly in the middle of the action in Little Brazil. Then he let the crowd gather around, sit on the sidewalk, and watch for free.

Rubin said the truck will be driving around New York City and parking in various locations to show the games.

“We’re trying to be ethnically relevant,” said Rubin. When Italy plays, they will park in Brooklyn’s Bensonhurst neighborhood. When Ghana and the Ivory Coast play, they will go to Flatbush and Harlem. Every stop will also include merchandise sales and store promotion.

For spectators, the hot sidewalk without refreshments was better than nothing. The door of every storefront screening the game was closely guarded by a staffer, with not one inch of room to spare for those just looking for a beer or a bite to eat. The sign on the door of one place said it all: “reservations only, we are fully booked.”

For some near Rubin’s truck, the crowds are part of what makes the World Cup special.

“It’s not just a game, you interact with people,” said Pedro Uintela, from Portugal. Though he and his friend Antonio Faustino, also from Portugal, came out to root for Brazil on Thursday, they said they’re supportive of the teams from every country.