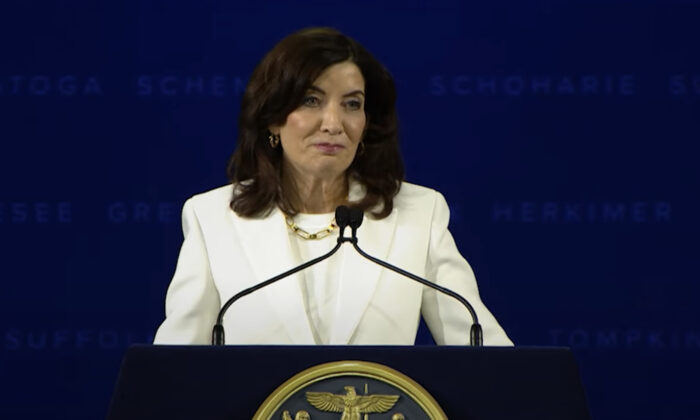 New York Gov. Kathy Hochul gives a speech at her inauguration ceremony in Albany, N.Y. on Jan. 1, 2023, in a still from video. (New York Governor's Office/Screenshot via NTD)
By Michael Washburn

New York Gov. Kathy Hochul has expressed opposition to rehiring workers in her state’s healthcare sector who fell afoul of COVID-19 vaccination requirements and lost their jobs while the pandemic raged.

In comments to the media on Tuesday, Hochul said rehiring unvaccinated workers was not the “right answer.”

“I don’t think the answer is to have someone who comes in, who’s sick, be exposed to someone who can give them COVID-19. I don’t know if that’s the right answer, but I’m pretty sure it’s not,” Hochul said.

Hochul explained her stance in terms of public safety.

“I think everybody who goes into a health care facility or a nursing home should have the assurance and their family member should know that we have taken all steps to protect the public health. And that includes making sure those who come in contact with them at their time of most vulnerability, when they are sick or elderly, will not pass on the virus,” Hochul said.

Her comments came less than two weeks after a New York state Supreme Court judge struck down a statewide mandate for medical staff to be vaccinated against COVID-19. Judge Gerard Neri found that Hochul and the state’s Department of Health had exceeded their legal authority by making the vaccine mandate permanent, and had unlawfully circumvented the state assembly, under whose purview such a weighty decision fell.

Neri also found that the mandate was “arbitrary and capricious,” citing evidence that COVID-19 vaccines don’t prevent the spread of the virus, undercutting the basis for the mandate.

After the ruling, the state’s Department of Health said it was “exploring its options.”

Last week, a group of Congressional representatives from New York wrote to Hochul expressing concern over staffing shortfalls facing hospitals in New York State, which has been worsened by the vaccine mandate.

“We write to you today with deep concern about disastrous staffing shortages that are hampering our state’s healthcare system and impeding New Yorkers from accessing quality care. While the shortages have been an ongoing issue, they continue to be exacerbated by New York’s draconian COVID-19 vaccine mandate for healthcare workers, which has forced nearly 34,000 healthcare workers out of their jobs. This has resulted in severe financial distress for New York hospitals and increased barriers to care for those in need,” the lawmakers wrote in the Jan. 19 letter (pdf).

The lawmakers go on to delineate the “devastating impacts” of the vaccine mandate and the severe disparities between the number of openings in the industry, on the one hand, and the number of workers who can be hired under the state’s policy.

They note that as of Dec. 7 no fewer than 9,300 openings for nurses existed throughout New York, and they cite a recent survey finding that 100 percent of New York hospitals suffered from a shortage of nursing staff, and 49 percent had to scale back some of their services to alleviate the staffing shortfall. No fewer than 27 percent of hospitals reported a risk of defaulting on their loans, with all the potential impact on vital and life-saving services that such an eventuality would entail.

“These statistics are striking and certainly should serve as a call-to-action for your administration,” the lawmakers wrote.

The letter goes on to criticize Hochul for insisting on the vaccination of workers at a time when the director of the Centers for Disease Control has said publicly that vaccination will not prevent transmission of COVID-19.

Michael Alcazar, a professor in the department of law, police science, and criminal justice administration at the City University of New York, wonders whether Hochul’s insistence on not rehiring unvaccinated workers has more to do with science or with paranoia, or might perhaps be political in nature.

Despite undergoing vaccination no fewer than four times, Alcazar himself contracted COVID-19 in December, he said.

“Initially, I believed in what the doctors advised, that being vaccinated would protect me from COVID-19 and stop it from spreading. This doesn’t seem to be the case, in my personal experience. Vaccinated and unvaccinated, masked and unmasked alike are still getting COVID-19,” Alcazar told The Epoch Times.

Hochul’s discrimination against unvaccinated workers stands in contrast to the approaches of institutions such as the New York Police Department, which is now rehiring officers cut loose in past months for not having received vaccinations. The department faces class-action wrongful termination lawsuits for its past policies, he noted. All this makes Alcazar wonder all the more about what might motivate Hochul’s decision.

“It makes me wonder if this is just a political stance. This may be how the left thinks, or what they believe is proper, and Hochul is not willing to side or agree with conservative ideas,” Alcazar said.

“Experts believe the vaccine does not prevent the disease, but just lessens the symptoms. Whether it’s the flu or COVID-19, it’s still a virus. People should take precautions, wash their hands, keep their distance to minimize exposure, and still lead normal lives and careers,” he added.

The Epoch Times has reached out to Hocul’s office for comment.